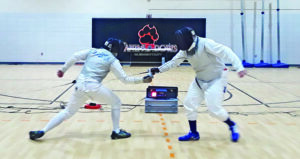 In most athletic endeavors, the bigger and stronger competitor possesses an advantage, but thatâs not so in fencing, according to Jon Greising, one of four volunteer coaches for the Des Moines Fencing Club (DMFC).

âYou canât bully your way,â he explains. âItâs all finesse.â

Fencing is essentially like a big game of tag, he adds. But in this game of gotcha, combatants are armed with giant knives and bound within a pre-determined area.

âYouâre trying to hit without being hit,â he says.

As such, gauging the distance at which you can tag your opponent is critical, as is attention to detail, understanding angles and precise footwork. 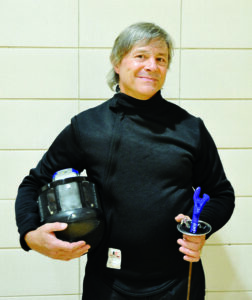 Jon Greising owns an impressive resume in the sword arts, and he also volunteers as a coach for the Des Moines Fencing Club. Photo by Jeff Pitts

âPeople argue about whether footwork is half of fencing or most of it,â he says, adding that fencers also need an acute ability to concentrate their focus, fine motor skills and the ability to cope with frustration. This is the main reason Greising advises parents to wait until their child is at least 7 years old before beginning in the sport.

Originally from Chicago, Greising now works locally as a data analyst, but he first arrived in the Hawkeye State after enrolling at Grinnell College. It was during this time that Greising unsheathed the sword for the first time.

âI was never really athletic in any traditional way, and I didnât really go in for team sports,â he says of his athletic prowess during his formative years. But the sportâs novelty appealed to his curiosity, as did the sportâs individual nature.

âYour success or failure is entirely your own,â he says.

Greising owns an impressive resume in the sword arts.

âJon is one of our best coaches and has had an amazing resume in the sword arts,â says Jason Reis, DMFC president.

As a coach, Greising touts the clubâs guiding principle, âthat we learn from each other and teach each other whatever we can.â

âWhatâs kept me so engaged with the sport is that itâs challenging for both the brain and the body,â says Greising. âI really believe this is a sport for everyone,â he says. ♦

Since its founding in 1997, the Des Moines Fencing Club (DMFC) has served Iowa as a nonprofit and a member club of the United States Fencing Association (USFA). Members of the DMFC participate in local and out-of-state tournaments, as well as perform demonstrations in the Des Moines metro. The public is invited to come observe and participate in DMFCâs 60-minute practices. The club currently has four USFCA certified volunteer coaches. Fencing classes are currently held at Fairmeadows Elementary, 807 23rd St., West Des Moines, but the group is actively looking for a permanent home. Visit www.desmoinesfencingclub.org for more information. ♦