Thursday, May 26, 2022
Join our email blast
Your Neighbors

Architecture on the Move with Ryan Ellsworth 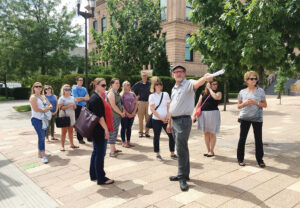 âIâm an architect, but I donât usually spend my day talking about architecture,â explains Ryan Ellsworth. Creatively designing spaces to efficiently utilize resources… Thatâs his preference, and itâs usually on his agenda somewhere. But like everyone else, a lot of his job is sitting at a computer, answering emails and answering phone calls.

âIt can be boring,â he admits.

Thatâs why Ellsworth volunteers for Architecture on the Move, an annual series of downtown architectural walking tours put on by the Iowa Architectural Foundation. The 90-minute tours take place every second Friday of every month, May-September, starting at 5:30 p.m. and leaving from Capital Square.

âI enjoy getting to actually talk about architecture,â he laughs.

Ellsworth is a long-time resident of the Des Moines area. Heâs lived downtown, and he works downtown at Estes Construction.

âIâm a big fan of downtown,â he says. âI love knowing whatâs new and also the history, which lends to my interest in the walking tours.â

The goal of the tours is to reach out to non-architects and educate the community while helping people gain an understanding and appreciation of quality design. Industry professionals do sometimes attend the tours, but according to Ellsworth, the groups generally consist of anyone looking for something fun and different to do, or of out-of-towners who want to learn more about the city, or of locals with an interest in downtown. Privately chartered groups are also common.

The cityâs four downtown quadrants each have interesting aspects, but the best tour, according to Ellsworth, is the one with people interacting and asking questions.

âI can talk a lot about a lot of different topics,â he says. âBut sometimes people start asking questions, and then weâll include (unplanned) things and go off script.â ♦

Architecture on the Move

Get out your comfy shoes and get ready to learn the ins and outs of downtown architecture. Architecture on the Move is an annual series of downtown walking tours put on by the Iowa Architectural Foundation and guided by real-life architects like Ryan Ellsworth.

These public tours provide an opportunity for people to appreciate and understand the architectural treasures of the city. The 90-minute tours start at 5:30 p.m. on the second Friday of every month, May through September, and they begin at Capital Square, 400 Locust St. in downtown Des Moines. Attendees have four options to choose from.

â¢ North: Includes the Principal Building and the developments nearer I-235.

â¢ South: Includes the Court Avenue District and the downtown area to the south.

â¢ West: Includes the city core and many of the metroâs tallest buildings along with the area westward down Walnut Street. ♦

â(Downtownâs) oldest building is the Hawkeye Insurance Building on Fourth Street,â says Ryan Ellsworth. Another popular tour topic is the World Food Prize restoration, which included the installation of solar panels and geothermal updates to a very old building while maintaining its historical character.