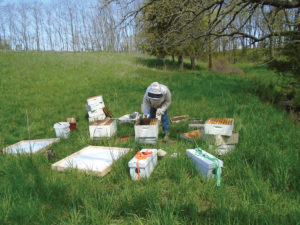 Julia McGuire is a local beekeeper, honey bee instructor and honey lover. If you see a swarm of bees in your yard after a storm this spring, she hopes you will find a local beekeeper instead of an exterminator. For help doing so, visit DesMoinesBackyardBeekeepers.org.

A 5,500-year-old jar of honey â the oldest known honey in existence â was found within a noblewomanâs tomb in Eastern Europe in 2012. The purpose of the honeyâs placement at the VIPâs final resting place isnât known, but everyone agrees: 5,500 years is really old. For all intents and purposes, honey is basically eternal. The sweet golden substance has the ability to keep for millions of years.

âIt wonât spoil,â marvels Julia McGuire, a local beekeeper with a passion for her craft.

Durability is one thing, but honey is also versatile. It was one of the worldâs first preservatives and food sweeteners. People use it to make sauces and salad dressings or put it in tea or sweeten meatballs. It even functions well as a natural cough syrup. But according to McGuire, not all honey is created equal.

âI have a collection of different honeys,â she says. âAt least 12. I save them, and Iâll break them out, and weâll have a honey-tasting party. Itâs pretty fun.â

Some honeys have a tangy taste, others are more minty, and still others are infused with a stronger floral or fruity flavor. McGuire says a savvy beekeeper can manipulate the honeyâs ultimate outcome by positioning the bees in different places. For instance, honey produced near soybeans will be flavored differently than honey that is concocted near apple trees or other agriculture.

During her day-job hours, McGuire works for the City of Clive, but the self-proclaimed âJill of Many Skillsâ wears many hats when she isnât on the clock. One of those hats is serving as an instructor for aspiring local beekeepers; students can earn credit for the new Great Plains Master Beekeeping program with her Beekeeping 101 course. Before this program arrived in Iowa, locals had to pursue certification outside of the Midwest. McGuire is also the creator of BeeLaws.org and the coordinator for her local club, Des Moines Backyard Beekeepers. She has kept honey bees in urban and rural settings since 2011.

âMany people keep bees in town,â she says. âThey (the bees) are quiet, and you donât really see them.â

Beekeeping is legal within the city on a limited basis, and she says she rarely gets stung.

âMost of the time people get stung, itâs not from honey bees,â she says. âI think there are a lot of yellow and black bees that are (wrongly) labeled as honey bees. I think a lot of people think they are getting stung by honey bees when they are not.â

Honey bees tend to be brown and fuzzy.

âThere are over 400 native bees living in Iowa,â she says. âSo…if you get stung, it might not be a honey bee. â

With storm season coming up, wind-felled trees often translate to homeowners uncovering an unwanted swarm of buzzing bees that they didnât know they had and donât know how to handle. McGuire says it is best to contact a local beekeeper instead of an exterminator.

âCall a beekeeper,â she says. âThey can come and put them in a place to be productive.â ♦