How did opera singing happen to a girl who grew up in Waukee? 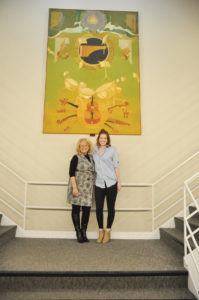 Opera is a bit of an unknown in the Hawkeye state, but for people who appreciate classic plot lines containing eternal human relevance performed by arguably the worldâs strongest vocalists and elite level orchestras, it might be your thing. That is the case for Kate Broderick, a central Iowa native and a junior at Drake University. Broderick majors in vocal performance, studying private voice and focusing on opera singing under the direction of Leanne-Freeman Miller, Drakeâs professor of voice.

Opera is a story, according to Broderick. But it is also much more than that, as it is a story that is set apart by its unique style of singing. Because most opera is performed in a language other than English, stage performers must find a way to reach beyond language barriers in order to achieve audience appreciation.

âYou have to be dramatic, and everything is oversized,â says Broderick. âYou have to get your emotions across all the way to the back row.â

Reaching the proverbial back row is done primarily by utilizing the emotion in oneâs voice, and, in opera, it is done without the aid of microphones, which arenât allowed. This rare skill requires, expertise and a powerful aptitude.

âIt really is the most challenging, elite type of singing,â says Freeman-Miller. âYou have to have a big voice, but you also have to know how to use it. Kate is a dream student.â

Performing challenging classics in a foreign language is not easy. But Maestro Stefano Vignati believes Broderick has what it takes.

âIâm Italian, and opera was born in Italy,â he says. â80 percent of operas are in Italian, and Kate has a great pronunciation. â¦ She is so talented. The instrument (Broderickâs voice) is absolutely gorgeous. And she is a good actress. She is engaging. She has already a professional approach on the stage. I invited Kate many times to sing in Italy where I lead three opera festivals, and every time she came she had a personal success.â

Broderick tends to her vocal cords just as athletes take care of their muscles. And she is dedicated to making herself better in all areas of her craft, including her acting skills.

âShe takes advantage of every opportunity to improve herself,â says Freeman-Miller. âShe does the work. She doesnât complain. She is very elevated.â

Who is the budding star when she isnât practicing or performing?

âIâm Kate Broderick. Iâm a lover of all things art. I spend a lot of time with my (two) cats … Herbert and Phyllis. … I work 4 a.m. shifts (most days) at Caribou Coffee, and Iâm a full-time student.â

âWe will have opera next year,â Broderick informs.

In all likelihood, that opera will again feature Broderick in some way, which means you can hear her for yourself. After that, the central Iowa homegrown talent is aiming at someday earning a living by performing music.

âI am a firm believer that you can do anything if you put in your 10,000 hours,â she says.