Saturday, May 21, 2022
Join our email blast
Your Neighbors 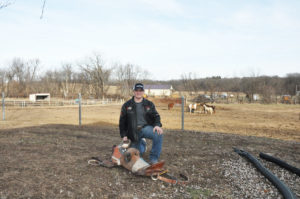 Earning hourly wages at a 9-to-5 is all well and good, but for Briar Dittmer, he prefers to be paid eight seconds at a time.

The Southeast Polk graduate is majoring in physical education while competing on a rodeo scholarship at Missouri Valley College in Marshall, Missouri. Briar will graduate in 12 months, and in January of 2020, he intends to hit the road, âhaulingâ full-time, which is rodeo speak for competing professionally in rodeos.

Being a professional athlete might sound like a stroll through the roses, but a cowboyâs life offers little glitz and glam, at least in the beginning. Chasing the dream, for Briar, will initially entail long hours in a van equipped with sleeping arrangements for two or three other touring pros. He plans to travel with companions who are pursuing the same goals in order to share the traveling costs. Each and every weekend, theyâll be seeking out rodeo events that are often hundreds of miles apart.

Pain is also a common reality in rodeoing. Pros often endure substantial injuries from punishing falls. Riders occasionally get trampled by extremely large and powerful animals, but Briar started in the sport as a youngster, and this isnât his first rodeo.

Through the years, Briar has sustained only a few minor injuries, mostly consisting of bumps and bruises. The sport collectively sets December aside for resting.

âI have a month off to get healed up,â he smiles.

As a collegiate athlete, Briar isnât able to ride as a full-time pro, but he can and does earn on a part-time basis at the sportâs feeder competitions. While home from school on holiday break, he plans on competing at Wells Fargo Arena, Jan. 11-12, at Cinch Worldâs Toughest Rodeo.

After that, itâs back to school to finish up his degree. And by this time next year, if all goes well, Briar plans to hit the road, living his dream, earning a little here, and then a little more there. Someday, if he accrues substantial enough annual earnings to qualify for the big show, his dream is to earn a top 15 spot alongside his college friend and three-time champion rider Tim OâConnell at the National Finals Rodeo (NFR) in Las Vegas.

Whatâs the most important thing to focus on to get there?

âJust keep getting on and getting better,â says Briar. ♦

WHAT QUALITIES MAKE FOR A GOOD RODEO RIDER?

Briarâs parents, Scott and Vicki, own and operate Dittmer Stables, a horse boarding operation just outside of town. The entire family adores the sport.

âRodeo is the one sport that really brings out our American Heritage,â says Vicki. âEveryone stands for the National Anthem without a second thought, prayer is still said before the competition starts at all rodeos, thanks is given to our veterans, and athletes cheer and support their fellow competitors. Itâs awesome!â

After 20 years in the game, the family has learned the necessary traits of a champion rider. Briar says good pound-for-pound strength is essential â as is core conditioning and balance â but a high volume of muscle mass isnât all that helpful.

âYou can train someone to be a bull rider,â says Briar. âYou donât have to be very strong.â

Other key traits and rodeo tidbits:
â¢ Skill and technique are the most important attributes.
â¢ The sportâs signature flopping motion â seen at rodeos as riders extend their arms and arch their backs â isnât a result of the animalâs force. Instead, it is a technique used to divert some of the physical jarrings while impressing the judges with flair.
â¢ The ride is judged not just by how well one rides but also on how hard the animal bucks. Thus, even as the rider holds on for dear life, elite riders are at the same time urging the animal to exert all of its energy into its efforts to toss him asunder.
â¢ Most rodeo afficionados wrestled in high school. ♦