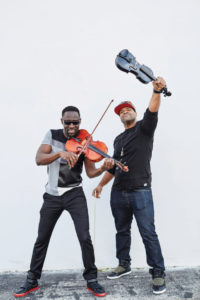 If you struggle deciding which musical genre you like listening to most â classical or hip-hop â how about both?
Thatâs what the group Black Violin performs â a little of both, as well as R&B, rock and bluegrass music. The duo plays a new genre of music, dubbed âclassical boomâ and brings their U.S. Classical Boom tour to the Des Moines Civic Center on Oct. 11.

The pair met in Dillard High School in south Florida, but neither aspired to becoming classical musicians. Wil, speaking from his Florida home, explains how the group originated. 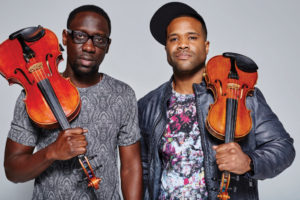 In junior high, Wil wanted to play an instrument in the school band. Prospective students were advised to go to different classrooms and try out various instruments. Wil, interested in playing the saxophone, walked into the corresponding classroom.

âI went to the wrong classroom, where they were demonstrating strings and a viola. So, instead of going to another classroom, I stayed there and thought Iâd give the viola a try,â he says.

He describes how Kev started playing the violin.

âKev was in trouble a lot, so his mom signed him up for a Saturday music class,â he says. âThey only thing they taught that morning was the violin.â

The duo played throughout high school orchestra, while still listening to hip-hop and R&B music. They began combining the genres and 23 years ago formed Black Violin.

Since then, theyâve appeared on âThe Ellen DeGeneres Show,â recorded anthem music for ESPN and NFL events and performed at Barack Obamaâs presidential inauguration party. Their album and single, âStereotypes,â debuted at the No. 1 Billboard Classical Music Crossover chart.

Wil explains about the songâs message.

âThis song pretty much tells people about who we are. We want to break those stereotypes. We donât judge a book by its cover; we donât look like classical musicians. Weâre a whole part of the songâs meaning and who we represent,â says Wil.

Wil says some audiences are unsure of what to expect when they attend their concert. Is it hip-hop? Is it classical?

âMost people call classical music either ballerina or elevator music, or not like hip-hop. But we combine both because it works for us,â he says. âThe whole movement is organic and very natural, and we do it in a way so people can relate and connect to our music. Weâre doing something people have never seen before and surprising people every night.â

âEveryone is there having a good time,â says Wil. âItâs amazing to see it from our perspective â the different audiences.â

During last yearâs sold-out tour, the pair performed for more than 100,000 kids in local high school music programs across the country. Wil says, âWe think kids can be inspired by us. Kids have a passion. They are our future, our innovative thinkers, who can inspire others to do the same.â

Tickets for Black Violin run from $32.50-$47.50; available at https://desmoinesperformingarts.org. ♦