In the midst of winter, Iowans need something to look forward to. How about a weekend full of blues music to warm the soul? The Central Iowa Blues Society (CIBS) is hosting its 28th annual Winter Blues Fest on Feb. 10 and 11 at the Downtown Des Moines Marriott.

This year, 20 regional bands will provide a foot-tapping, grooving two days of rock and blues. Scott Allen, president of the CIBS, says the nonprofit organization has been around for 30 years. Its mission is to promote blues in the city and provide blues programming and education.

At the festival, musicians play on different stages. Allen said he tries for a diverse line up each year.

âI try not to book the same acts every five years. This year weâve got a lot of rocking-style blues.â

âBlues has its fingers in all genres â country, rock, jazz â all different types of blues,â Allen said. âPeople might not say âI like the blues.â If you like rock ânâ roll, thereâs blues in there.â

Nearly 100 volunteer members are needed for the festival, and get in free of charge. Allen suggests attending one â or both â days of the festival.

âIf youâre unfamiliar with the blues, give it a chance. See what weâre all about.â 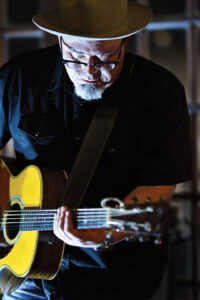 Ask local blues fans who is the most versatile and talented musician in Des Moines, and Heath Alanâs name will undoubtedly pop up.

For the Winter Blues Fest, Alan is coordinating an all-star lineup of Iowa musicians for a blues expo. This yearâs group includes himself, along with Vicki Strong, J.C. Anderson, Greg Sutherland, Tanner Taylor and Kris Karr.

Alan began his blues journey early in life. He grew up in the Cedar Falls area, home of the famed Blue Band. He began performing professionally at the age of 15 when he recorded his first album through his gospel church. His mom, who was a great blues singer, provided inspiration and connections with musicians.

He played with Blue Band and attended college, playing the saxophone. Years ago, he moved to Des Moines and searched for venues to play. He discovered the Greenwood Lounge, where he brought musicians together for a weekly jam and now performs regularly. Heâs been inducted in the Iowa Rock and Roll Hall of Fame. While singing and playing guitar or the saxophone, he plays with various bands and has recorded with dozens of musicians and genres, but he returns to the blues.

âCulturally, blues isnât in fashion â itâs not on the mainstream radio,â he said. âItâs important; the greatest invention that Americans created is the blues. We want to keep the blues music alive and build on the understanding of cultural music.â

âItâs more than a style or sound. Itâs being truthful. Itâs a way of crying in a positive way,â he explained. âIâve heard how men canât cry. With blues, I can release if Iâm in pain. Itâs very therapeutic. I need the blues to feel better.â

He feels fortunate performing with talented musicians and at venues that support local music in Iowa, including Noce and Iowa Public Radio. Heâs currently working on an Americana record called âLight Blue Hiawatha,â due for release in summer 2023.

Supporting the CIBS comes easily to him.

âI love the CIBS. Itâs a big family I get to serve by bringing together people. Itâs the highlight of my year,â he said. âLearn all about the great blues music at the Blues Fest.â

For tickets and a complete lineup of the musicians, visit www.cibs.org. ♦