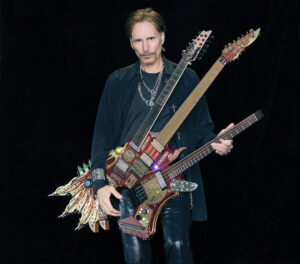 The definition of a virtuoso is someone highly skilled in music. For guitarist Steve Vai, virtuoso is an understatement.

Vai has been voted by Guitar World magazine as one of the top 10 guitarists of all time, ranking up there with Eddie Van Halen, Jimi Hendrix, Brian May, Slash and Jimmy Page.

Vai has played with his own band for decades, but heâs also played with musicians such as Frank Zappa, David Lee Roth and Whitesnake. Heâs sold 15 million albums and won three Grammy awards, plus countless other guitar-related recognitions. Des Moines music lovers, get ready for Vaiâs âInviolateâ tour at Hoyt Sherman Place on Nov. 22.

Vai was originally scheduled to play in Des Moines in March 2022 but pushed back his tour, which afforded him time to heal from shoulder surgery. Since then, heâs conquered a new guitar, a âbeastâ called the Hydra.

The Hydra is similar to a multi-neck guitar but is more like a Swiss army knife as it produces a dozen sounds from one instrument. The Hydra is three guitars in one â a seven- and 12-string guitar, four-string bass â plus, it includes 13 harp strings and other synthesizer-type controls. The Hydra came about after Vai visualized himself playing âthis thing.â

âIâve always had a fascination with multi-neck guitars. I had some built, but felt the multineck never covered all the bases,â he said.

When creating the instrument, he reached out to Ibanez, a Japanese guitar brand that custom-makes his guitars. He sent in a mock-up, explaining all âthese crazy thingsâ on the guitar. It took him two years to send it.

âIt was like a Mad Max blowing steam,â he said. âIt was a steam punk I was attracted to.â

Ibanez sent an illustration back, then a cardboard cutout of what the guitar might resemble to scale. Vai and Ibanez tweaked it and added features, and the Hydra prototype was delivered to his door.

âI was both stunned and terrified. I had it set up in my studio for a year and a half. Every time Iâd walk past it, it hissed at me,â he admitted.

After his mind was in a powerful state, he dissected the guitar, learning one section at a time, step by step. Once he mastered the features, he was amazed by the melody heâd carved out.

After about six weeks, he âmastered the beastâ and filmed the video, âTeeth of the Hydra.â With nearly five million views, a guitar lover must check out this one-of-a-kind guitar, which brings new meaning to musical multitasking.

The Hydra joins his collection of 260 guitars, many of which heâs received to test out various guitar makers. Heâs unloading 45 of his guitars in an upcoming auction, benefitting his charity, âMake a Noise Foundation,â which provides instruments and education for young musicians.

âI like keeping my guitars, but itâs a good idea to get rid of some. I donât play them all,â he said.

Vai has toured for 40 years, with the same band for the past few decades. Sounding like a self-help guru, he challenges himself to evolve his showmanship. When talking with Vai, he frequently cited âvisualizationâ as to why heâs become successful over the years.

âIâve upped my game. I visualize and picture myself doing something beyond my ability,â he reflected.

He admits that the greatest human dilemma is how to stop the voice in your head.

âIf you recognize obstacles â thoughts in your head â you can start to release these thoughts, allowing peace and space in your life. Our greatest tool is our ability to visualize,â he said.

At age 62, he said he feels heâs hit the pinnacle of success, as he performs in a joyful, powerful state of mind.

âI feel like Iâm in my prime. My connection with the audience is tight and deep,â he said. âFans who come to the concert will recognize that connectivity. Itâs an enjoyable night of melodic guitar playing.â ♦