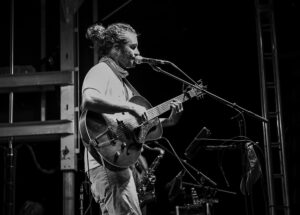 Based in Des Moines, Damon Dotson is a full-time musician.

As a musician, Damon Dotsonâs gigs have taken him to neighborhood bars, wineries, county fairs, outdoor festivals and even a barge in the middle of a lake.

In fact, Okoboji was where he performed some of his first concerts. He credits Okobojiâs vacation visitors for sharing the word of his musical talents.

âIâd play local places in Okoboji, and the visitors would go back to their towns and spread the news about my music,â he says.

He originally played the drums in high school with an Okoboji jazz band. He learned guitar in college and began writing and singing original music. Heâs a full-time musician based in Des Moines with his own band, and he also performs solo.

Heâs written and recorded four albums. At concerts he plays a mix of originals and covers.

âI love playing my original music as much as possible,â he says. âWhen we play covers, it doesnât sound like the original as we put our own spin on it.â

If he plays with his band, he says it feels complete if thereâs a saxophone.

âBecause of my jazz background, I love the horns and usually always have a sax,â he says.

However, the music he plays isnât jazz; itâs a pop/rock mix.

âMy big influences are Jason Miraz, Dave Matthews and Zac Brown, but itâs not quite country,â he explains.

Dotson once opened for Willie Nelson at a venue in Minnesota, where it was an exciting, yet disappointing, evening.

âI never got to meet him because I had to go to another show,â he laments. âRight as I was pulling away, I heard the crowd roar, and he started singing âWhiskey River.â Iâll never forget I missed seeing him.â

Fourteen years ago, Dotson hosted a concert called Lake Affect on a floating barge in Okoboji. It was so popular that heâs performed the concert annually ever since then.

âThe first time, there were 10 boats. Now thereâs 3,000-4,000 people on boats, or they swim up to the barge or pile in off shore,â he says. âItâs a unique concert experience.â

The biggest challenge for Dotson is to balance home and work with him often performing nights and weekends. With two kids younger than age 4, itâs hard to be away from home.

âMy wife is a champ. Sheâs amazing,â he says.

When the music is flowing, he feels the energy from his fans.

âIâm grateful for the connection when I see a table or group into my music. Itâs exciting to feel the musical energy thatâs happening. Itâs like a high,â he says. âI have an overall appreciation for people supporting live music. Iâm grateful to be able to play so much. Itâs a dream.â ♦