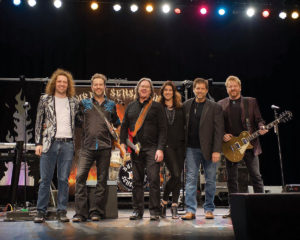 âAt least itâs not a forgettable name,â he says. âWeâve gotten a lot of grief about our name. Iâm guilty of thinking that one up.â

His thinking? The band is on fire. And to their fans, theyâre hot. The bandâs core lineup has been playing together since 2004. They play a variety of rock, country, disco, funk and top 40 music.

âWeâre all over,â explains Helgeson. âWe play Beatles, Lady Gaga, Bruno Mars, and then weâll switch over to a slow country tune. We play for whatever the audience is. Some people love or hate disco, but we still do disco, too.â

Favorite venues include Motherâs Pub in Ames, Snus Hill Winery in Madrid and the Latitude 41 in Saylorville, where the âdock gets rockingâ and the band members secure their mics so they donât fall in the water.

Part of the bandâs entertainment is to encourage audience participation through their wireless equipment.

âWeâve had a tuba player for âSweet Caroline,â and weâll bring a drum set like weâre in a marching band,â he says.

The bandâs mission is keep the music fresh and fun.

âYou donât want to spend a long week at work and then see a boring concert, Helgeson says. âWe donât take ourselves too seriously. We want to have people join in for mutual fun. We donât want to seem too old and crusty.â

Helgeson says the local band scene is a fellowship among musicians, and thereâs a certain expectation to keep on task with other bands.
âWeâre all friendly rivals,â he adds. âWe compare notes and support one another.â

Helgeson says the bandâs longevity is not about making money or pulling in the most fans.

âWe make enough money to fix everything we broke. Some venues might not be the highest paying, but itâs the energy of the crowd that makes it memorable,â he says. âWe focus on whatâs important â making music and having fun.â ♦