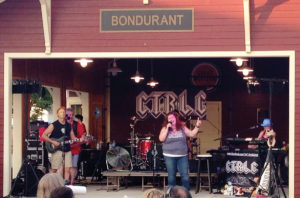 When musician Mike Maly put together a new band four years ago, he envisioned playing new wave music. He soon switched gears. Des Moines wasnât a ânew wave type of town.â So, he and his wife, Vanessa, and former bandmate Bob Adams agreed on a party rock genre, playing music from the 1980s, 1990s and 2000s.

âWe play music that everyone knows and try to play it as accurately as possible,â says Maly.

Itâs similar to a computer â when needing to copy the exact phrase, you hit control âcâ on the keyboard, or CTRL C. And thatâs how the tech-savvy band came up with their name.

âThat was hard. What can we call ourselves that sounds cool but respectable,â Maly says. âWhat we do is copy other peopleâs music. CTRL C is what we came up with.â

The band plays mega hits by Guns N Roses, B-52s and more. During one medley, they extract the âmeat and potatoesâ of three Styx songs. Another crowd favorite is Queenâs âBohemian Rhapsody.â For accuracy, the band recorded vocals 114 times, which is played when they sing live. Maly, a drummer, who also serves as sound expert, cut the unique layers.

All of the members played in previous bands, except for Sara, who only sang in karaoke contests and nailed a Craigslist singer ad. Between Sara and Vanessa, a classically trained musician, the range of the women is mesmerizing.

âThe two have morphed into a powerhouse. Their energy draws in the crowd,â says Maly.

Each showâs set list is different. âMost fans respond to concert-type pieces, and we prefer dance numbers,â he says. âWe strive for a show that, afterwards, we say, âThat was the one.â â

âIâm the toughest critic. If I canât play to these levels, then we need to figure something out,â he says. âI hope the crowd feels the same way and feeds off that energy. Itâs important for us to not go through the motions. Weâre not just another Des Moines cover band. We hope fans get something out of it.â ♦