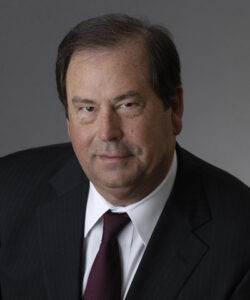 John Ruan III was raised by a feisty, tough, bare-knuckle man who started with a dump truck in Beacon, Iowa, and ended up with an empire that stretched across the country. At the time of the elder Ruanâs death, in 2010, the Ruan family owned Bankers Trust, the largest privately owned bank in the state, as well as a huge trucking company that bore his name and a skyscraper or two, among other things.

It must have been hard to be his namesake son.

The son got rid of some of his fatherâs pet projects â selling the Marriott Hotel for a tidy sum, among other things â and built the core businesses to ever-greater success. He became head of the U.S. Chamber of Commerce for a term, exerting great influence on that group for years, and he became involved in state and local groups that profited from his leadership and his advice.

For what the son did inherit from his father was a love of Iowa and of Des Moines and a fierce loyalty to his friends and employees. John Ruan III built on those, and â urged on by his wife, Janis â also built on his fatherâs generosity, giving away millions of dollars, often quietly. Rarely attaching their names to projects in big, bold letters, John and Janis Ruan (and, increasingly, their two children) worked hard to make Des Moines a great place to live.

When Des Moines parks boss Ben Page needed something, the Ruans were often his first call. It is because of the Ruans that Fleur Drive is such a graceful entrance to Des Moines; Janis Ruan hired a famous landscape architect to design a roadway that was more than a roadway, that was lined with flowers and trees. That âput us on the mapâ for visitors coming to town, Page says. The ordinary was never enough. You can thank the Ruans, in large part, for the rose garden at Greenwood Park, the lilacs at Ewing Park, the downtown flowers â and a zillion other things.

And then thereâs the restored library, sitting like a stately manor house on well-manicured lawns on the banks of the Des Moines River. The building now is home to the World Food Prize, an award championed by John Ruan II and his pal, Nobel Prize winner Norman Borlaug. John Ruan III shepherded the effort â and in large part financed it â to restore the building to its one-time elegance and to ensure that the World Food Prize organization continued to play a huge role in the world and in Iowa.

John Ruan III was almost shy at times, never seeking credit for the many things he did and often going out of his way to avoid it. He was quick and funny, with a dry, wry wit. He  enjoyed having dinner with his wife at the Embers on Ingersoll â not exactly a go-to spot for fashionable folks who want to be seen â rather than at high-end restaurants (where the food wasnât as good).

He liked to hunt, to play golf and to watch football games, especially Iowa State and Northwestern games. And if you happened to drop something off at the house on Foster Drive in the early evening, as likely or not youâd see him through a window, sitting in his easy chair absorbed in a book. It was usually a biography or a history book. He was well-read.

He wasnât particularly political. His father was not shy about knowing presidents, but if John Ruan III knew any, he didnât boast about it. He was a Republican â by birth and by inclinationâ but he was more in tune with Bob Ray than Donald Trump. Three years ago, he supported his friend Fred Hubbell in his effort to unseat Republican Governor Kim Reynolds. But he also wrote checks to Reynolds.

Eight months ago, John Ruan got sick. He spent the rest of his life in hospitals, dealing with a litany of diseases that, finally, took his life. He was 78 years old when he died on Saturday, Sept. 11. He leaves a grieving family, a sad community and a wonderful legacy.

His father would have been proud of him. ♦