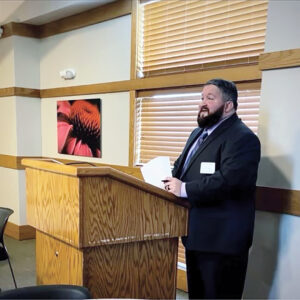 C.J. Petersen speaks to Democrats earlier this year. He is a former chair of the Carroll County Democratic Party.

The Iowa Democratic Party, in a little more than a month, will elect a new state party chair.

A leader poised for the position is rural Iowan C.J. Petersen, the chair of the Iowa Democratic Partyâs Stonewall Caucus, a leader on LGBTQ issues, and the former communications director for U.S. Senate candidate Mike Franken.

Petersen would bring the right and relevant portfolio of professional, political and, perhaps more important, life experiences to the job.

Heâs 32, gay and rural. C.J. lives with his husband, Luke, in Templeton, across the street from the nationally known Templeton Rye Distillery. The couple are moving to Audubon County, near Exira, to a rural acreage. His roots stretch a little farther south into Cass County, too.

C.J.âs personal life story is one of remarkable resilience. He grew up poor, rural poor, and can recall desperate days of food insecurity in the Atlantic of his youth. He battled addiction to alcohol and struggled to emerge from the confusion surrounding his own identity into a man in a committed marriage, a person with a raft of friends, whom he looks out for with great care.

All of this background, of course, gives him an instinctive empathy, a kindness and a personality that allow C.J. to meet people where they are, as they are.

Over much of the last year, I watched C.J. masterfully manage Frankenâs message through ebullient days and challenging ones, crises and heady moments of great trajectory, that had U.S. Sen. Charles Grassley thinking seriously about how he might wrap a long career in government.

C.J. constructed what national political professionals widely regard as a brilliant social media strategy. C.J. traveled the state with Franken, seeing firsthand what messages resonate in its disparate reaches. He also brought a fierce urgency, an ability to remain on offense.

The party is hungering for resilience, a modern reconstruction into a political coalition of imperfect allies. Having grown up in rural Iowa, C.J. knows how to take the fight to Republicans and what strategies will persuade independent and crossover voters, which the party needs but a slice to regain footing.

Having worked for U.S. Sen. Bernie Sandersâ presidential campaign, C.J. has connections and credibility in the partyâs progressive wing.

And he understands the more traditional elements of the party having worked alongside Franken, who remains a personal friend of C.J.âs.

The road back for the Iowa Democratic Party runs through the rural part of the state. The mission isnât a fantastical full conversion of 70% Trump-King-Reynolds counties. Itâs persuading one of those seven voters, maybe two, to consider Democrats at least some place on the ballot, and adding new voters to the rolls.

Cities and the sprawl of the suburbs are essential, too, of course. But keep in mind, those suburbs are populated with people from Carroll and Algona and Oskaloosa who maintain strong cultural connections to rural Iowa. There are more than 1,000 Carroll Kuemper Catholic High School alums (from a town of 10,000) living in the Des Moines area. Hit repeat on that where migration from other Iowa towns is concerned.

It will take a coalition of Democrats often at odds with each other for the party to rebuild. A small band of purists may as well just spend their time shopping at REI in West Des Moines in preparation for a future in the wilderness, a destiny of political obsolescence.

There are openings for a Democratic revival.

Gov. Kim Reynolds is likely serving the issue for a new Democratic rural-urban-suburban coalition as she appears ready to muscle through a regime of private-school boosts that will diminish, if not downright maroon, many public school districts in rural Iowa.

Dogged and disciplined messaging on this is part of the rebuild.

The bottom line with the choice of party chair, in what are urgent times for Democrats who are but a step or two from the Grim Reaper, is to find a person who understands and respects all elements of the Democratic Party and knows how to persuade Republicans and right-leaning independents when they are persuadable.

C.J. Petersen deserves full consideration, not just for the sake of the Democratic Party, but for all Iowans, including the Republicans who know in their hearts that this state is better off with more than one robust political party. ♦

Douglas Burns of Carroll is fourth-generation journalist and founder of Mercury Boost, a marketing and public-relations company.