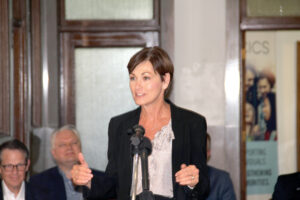 Gov. Kim Reynolds state recently, âThe fight for life is not over. As governor, I wonât rest until every unborn Iowan is protected and respected.â

Republicans, with a generational win in hand with the overturning of Roe v. Wade, are looking to ban abortion at the state level across the nation. Iowa Gov. Kim Reynolds is consistently at the forefront of that effort.

âThe Supreme Courtâs greatest moments have come when it allows America to embody more perfectly the enduring truth on which it was founded: that all human beings, without exception, are created equal,â Reynolds said in a statement. âBy that measure, todayâs historic decision is clearly one such moment. But the fight for life is not over. As governor, I wonât rest until every unborn Iowan is protected and respected.â

In 2010, during an interview with the Carroll Times Herald, Reynolds was asked to elaborate on her early anti-abortion positions.

If her stance on abortion prevails, and it is criminalized again, what should the penalty be for a physician who performs an abortion or a woman who has one?

âWell, I think it would be equivalent to murder,â Reynolds said in 2010. âI would want to research that before I would lay specifically out what the penalties would be.â

If someone is stabbed to death in front of Pizza Ranch (where we were interviewing Reynolds then) right now, is the culprit guilty of the same crime as a doctor who performs an abortion?

So itâs a different kind of murder then?

âI would want to take a look at that and make sure that I completely walked through that before I would say anything right now,â Reynolds said. âIâm not going to give an answer to that right now without thoroughly looking into that and making sure that Iâm looking at both sides.â

If sheâs strongly pro-life, why hasnât Reynolds thought about the punishment component as criminalized abortion is the end game, the logical conclusion, of the pro-life movement?

âI donât know if it needs to be the death penalty,â she said. âIs that what youâre asking me?â

Should the doctors and women involved in the abortion get a ticket, a fine, or should they be executed?

âI think that we would take a look and make sure that the punishment met the crime,â Reynolds said. âIt would depend on the level of crime that was served. I would want to be sure to take a look at that before I gave an off-handed comment to that issue.â

Asked by Political Mercury about the evolving abortion policy, U.S. Sen. Charles Grassley, R-Iowa, said that in post-Roe world, he predicts women and doctors involved in abortions wonât be going to prison.

âI donât visualize any state putting a mother in prison because she had an abortion. And I think that there would be not even doctors put in jail,â Grassley said.

âSome people would say there is something about the physical nature of Biden himself. But I donât think thatâs a problem. I think itâs the bad policies,â Grassley said.

By physical nature does Grassley mean age? Does he think Biden is too infirm to do the job?

âI donât see those things, but I know that thereâs a lot of TV talk about it. If Iâm gonna listen to other people, there may be a problem there,â Grassley said.

Here is an interesting take on the importance of the Iowa Secretary of Agriculture position.

The race for secretary of Iowa Agriculture isnât at the top of the ticket on the November ballot.

But it effectively should be, said the Democratic candidate for the office John Norwood.

âI think this is fundamentally one of the two most important positions in Iowa,â Norwood said during a recent outdoor event at Whiterock Conservancy attended by 40 people.

In fact, Norwood said, the state ag secretary position could be more important than other races in Iowa because so much of the nation sees Iowa as a leader on farm and land-use issues. ♦