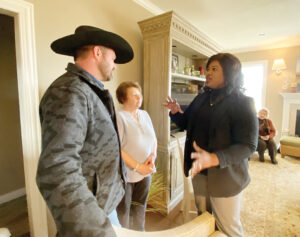 Former Crawford County Supervisor Dave Muhlbauer, a Manilla Democrat, talks with Patsy Halbur of Manning (center) and Democratic candidate for governor Deidre DeJear on Sunday at the home of Steve and Barb Middendorf of Carroll. Photo by Douglas Burns

Democratic gubernatorial candidate Deidre DeJear, a Des Moines businesswoman, hit on themes of job creation, boosting health care and rural development during a Carroll event in which she stressed that her party needs to make its case, not just respond with outrage to Republicans.

âLetâs not fight to prove a point anymore,â DeJear said. âWeâre going to let the Republican Party be their authentic selves.â

DeJear spoke to a crowd of about 20 people from west central Iowa at the home of Steve and Barb Middendorf in Carroll on a recent Sunday afternoon. DeJear delivered a 30-minute speech but talked individually with voters at the Carroll home for more than an hour.

DeJear is the lone Democrat on the June primary ballot and will face Gov. Kim Reynolds, a Republican, in the November general election.

On the issues, DeJear said students are not coming ready for school in many elementary schools and that more resources need to be directed to public education. She wants to see more trades being taught in Iowaâs high schools and sees that extending to such pursuits as cosmetology and barber school.

âI want them at the end of the day to have a couple of options,â DeJear said of graduating Iowa high school seniors.

DeJear said it makes sense to increase access to mental-health services in Iowa, and there is a budget surplus to do it. Iowa ended fiscal year 2021 with a $1.23 billion budget surplus, but Republicans are treating it like a âtrust fundâ instead of using that money to help struggling Iowans, DeJear said.

âIâm of the mind that you have to be in a position of privilege to have a trust fund,â DeJear said.

DeJear found a receptive audience at the Middendorfsâ.

âI thought it was fantastic,â Patsy Halbur of Manning, 72, said of DeJearâs speech. âI like it because I have been very unhappy with Kim Reynolds, and I have to say I voted for her (Reynolds) way back when. I was a nurse at one time, and I think a lot of people in Iowa would be alive today if she (Reynolds) had a decent COVID policy.â

Halbur said Reynoldsâ handling of the pandemic was terrible.

âShe just handled it the way Donald Trump told her to do it,â Halbur said.

Blaine Riesberg, 32, an employee of the New Hope Bargain Shoppe in Carroll, and a Democrat, said heâs impressed with his partyâs candidate for governor.

âI like what she said,â Riesberg said. âShe talked about things that are important to me like water quality, improving that. She talked about collective bargaining. I approve of that.â

Barb Middendorf, a Coon Rapids-Bayard teacher, and the co-host of the Carroll event, says DeJear can close the gap and surprise the state.

âI think there is never a doubt in our minds that a surprise can always happen,â Middendorf said.

Middendorf said DeJear is highly knowledgeable about the economy and brings instinctive campaign abilities to the race.

âNo. 1 is I think she generated a lot of energy, and I think that is a positive thing that any speaker can do,â Middendorf, the treasurer of the Carroll County Democratic Party, said. âHer delivery was very strong in that she was forward in what she was able to get across.â

Gene Meiners of Templeton, a Carroll County supervisor, and a Democrat, has heard DeJear speak twice.

âI think sheâs a very energetic person,â Meiners said. âSheâs very down to earth and more for common people. She understands the problems the people of Iowa have. I think she could surprise people. She has the energy behind her that this could happen.â

C.J. Petersen, the chairman of the Carroll County Democratic Party and a member of the partyâs state central committee, said DeJear brings empathy and understanding to the campaign.

âWe have the opportunity this year to elect a governor who sees the good in people, no matter the struggles theyâve had,â Petersen, who lives in Templeton, said. ♦