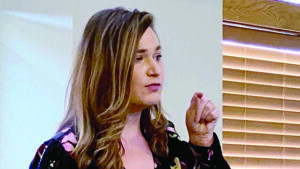 First elected in 1958 to the Iowa Statehouse â during the Eisenhower administration â U.S. Sen. Charles Grassley, R-Iowa, has served in public office continuously for more than 60 years â and thatâs too long, said former Iowa Congresswoman Abby Finkenauer, who is seeking the Democratic nomination for the Senate.

âI donât care who you are, which party you are, 47 years in Washington, D.C., is too dang long for anybody,â Finkenauer said in an interview with Political Mercury.

Finkenauer, 33, said she recalls watching Grassley and former U.S. Sen. Tom Harkin, D-Iowa, collaborate on projects and legislation for Iowa with bipartisan firepower, much of it fueled by their seniority. Harkin retired from the Senate in 2015, having served in Washington since 1975 â in both the House and Senate.

âYou might not have agreed with them on everything, but at least there was that respect there,â she said. âAnd Iâve got to say after watching Grassley, specifically over the last 10 years, heâs changed. He is not the same guy I remember growing up watching.â

For her part, Finkenauer, who has Dubuque roots and lives in Cedar Rapids, said she will limit herself to two terms in the Senate â 12 years â if she clears a Democratic primary field in June and goes on to win the general election in November in a race she expects to have with Grassley, who faces a GOP primary challenge from State Sen. Jim Carlin, R-Sioux City.

âThis race is about myself and Senator Grassley,â Finkenauer said. âThatâs what this is.â

Finkenauer is waging what she says will be a forceful, working-people-oriented campaign, that is door to door and visible.

Iowa Democrats made a politically tragic miscalculation by taking candidates, campaign workers and volunteers off doors during the 2020 cycle, a move made to avoid spreading COVID-19 during some of the deadliest months of the pandemic, but a decision Finkenauer said she would change, the now U.S. Senate candidate said.

âUnfortunately, in 2020, when we pulled ourselves off doors, and werenât talking to people face to face, it made these campaigns very difficult,â Finkenauer said.

âYou can knock; thereâs ways to do it in a safe way,â she added. âI donât care if we have to be in HAZMAT (hazardous materials) suits in 2022, we need to be on doors. Thatâs real, because of the fact we have to talk to each other face to face â with the lies, with the misinformation, with how that spreads. We have to do the work.â

Finkenauer lost a re-election bid to her east-central Iowa district in 2020 to U.S. Rep. Ashley Hinson, a Republican who is running for a second term this year.

âI know that we can win this because I know who I am, I know Iowa,â she said.

She blamed former Democratic Gov. Chet Culver â who left office after losing an election in 2010 to former Gov. Terry Branstad â for the departure of many labor union members from the Democratic fold.

âIâll be honest, I think weâve had Democrats in the past, Chet Culver in particular, who said things as he was running, and then gets in office and loses a lot of trust with folks, particular folks in the labor movement, for what he did when he vetoed Fair Share or when they couldnât even get done prevailing wage at the state level and broke a lot of trust,â Finkenauer said.

âFair shareâ was a bill to make non-union workers pay something for union services. As it is, with Right to Work, employees in Iowa can elect not to belong to the union and just get what union leaders in the state call a âfree rideâ when it comes to leverage with employers. They get all the benefits of a union contract, including representation in disciplinary situations, but they donât pay dues.

Finkenauer said she ran for the Statehouse at age 24 because she was tired of elected officials not understanding working families. Her father is a retired union-pipefitter. Finkenauerâs mother has worked in the Dubuque schools. ♦