A coffeehouse Q&A with Biden 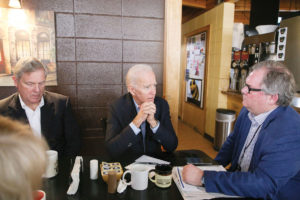 âItâs hard for people to get their head around it because itâs so new, and itâs so, in one sense, simple, but itâs also so complicated to people,â Biden said. âGuess what? Those biofuels are paying people $45 an hour, not $15 an hour. And guess what? That means they stay in the neighborhood even though the store closed.â

Boosting biofuels through increased use in the nationâs fuel mix and enhancing the role of bio-based manufacturing with commodities and farm byproducts is a rural-economic-jumpstarter plan Biden developed with the close counsel of former Iowa Gov. Tom Vilsack, a two-term U.S. secretary of agriculture and a fixture at recent Biden campaign events in the Hawkeye State.

Meanwhile, Jeffersonâs high-profile foray into modern tech careers with the opening of Accentureâs forge, or branch, emerged as an example of future-minded solutions for the rural economy in a wide-ranging interview with Biden, the former vice president and national Democratic White House frontrunner who sat down with CITYVIEW for 20 minutes during his recent swing through western and central Iowa.

CITYVIEW asked Biden about the online-sales Goliath Amazon and its plans for distribution and fulfillment centers in the Des Moines area, developments that will further challenge, and in some cases devastate, struggling retail in rural cities like Carroll and Jefferson.

Biden said he understands what technological development in Silicon Valley and Seattle are doing to traditional jobs in the Midwest. He sees the nation as being in the fourth major industrial revolution in history, and he referenced Luddites smashing machinery in the early 1800s as cotton mills and other advances killed their jobs, much as Amazon is doing to retail in contemporary America.

âThe same thing is happening now, and we are not paying nearly enough attention about what to do about it,â he said. âItâs not just rural America thatâs getting killed. Do you realize we lost 220,000 retail jobs, average salary $50,000 a year, average age 49 years of age? What do they do now? They are either all or half of the income of that family (that was lost) because everything closed down.â

The nationâs leaders must consider what they can do to educate and train American workers for new jobs in the modern economy, Biden said.

âI donât think you can say, âLetâs stop technology; you cannot use a drone to deliver a package. You cannot be engaged in buying online. You cannot do any of that,â â he said. âYou canât do that. Thatâs like saying â¦ when television changed everything, âYou canât own a television.â â

Biden said heâs concerned with online data privacy and Internet companiesâ use of information they collect on users and consumers searching for products and experiences.

âDo you ever notice you automatically start getting ads from the same people?â he said. âThat worries me even more because it goes into the depth of your privacy and what else it can tell about your habits and where you stay and where you shop and follow you.â

One way to counter loss of traditional jobs to Internet commerce, Biden said, is to create a âtotally different baseâ of career opportunities in rural America.

âWe can fundamentally change rural America and small-town America by a significant investment in new technologies and new science and new approaches to deal with agriculture, bio-based manufacturing,â he said. âItâs real.â

He wants to frame the fight to reverse global warming in part as an economic opportunity for farmers.

âWe should be focusing on how to produce biofuels,â he said, noting that people in urban areas can connect with rural America on carbon-reduction strategies as farmers get paid to offset city pollution.

âAmerica is the only country in the world that has taken big crises and turned them into gigantic opportunities,â Biden said. âThis is a gigantic opportunity for the United States of America to deal with climate change and global warming, because the farmers are in the position to make everything, from the water to the air, purer.â

In Denison, and in other stops along his recent campaign swing â what Biden called the âNo Malarkey Tourâ â the former vice president made the argument that he has the experience to make hard foreign policy calls.

âYes,â Biden told CITYVIEW when asked if thatâs the case.

Did Truman make the right call?

âYouâre not going to get me into that argument, as much as youâd love to,â Biden said.

Biden said after arriving in the U.S. Senate in 1973, he immersed himself in arms-control work involving nuclear weapons.

âI spent a lot of time not only understanding it, but actually learning how to make an atomic weapon,â he said.

Biden said he spent decades working to move the world in the direction of reducing nuclear weapons.

âWhat happens if any of this got in the hands of a terrorist?â he said. âItâs not 1944. We are in a situation now where you can go online and know how to make a nuclear weapon.â

The United States and its allies must maintain a nuclear umbrella because Japan and other nations might develop nuclear weapons if they were not sure of protection from the United States, Biden said.

âEverything weâve worked toward is to move it off of a hair trigger, reduce the total number of weapons available, prevent the material that is available to make a nuclear weapon from being able to be proliferated,â he said.

Biden, a devout Catholic who attended Mass in Carroll, where he stayed with his wife, Jill, before both barnstormed rural Iowa, said he disagreed with Pope Francisâ comment late last month in Japan that the world should abolish all nuclear weapons.

âI think his voice is important,â Biden said. âI think itâs worth the world listening to it, but as a United States senator and as vice president, Iâve still remained very, very involved in arms control and control of chemical and biological as well as nuclear weapons.â

As president, Biden said, he would have the entire strategic command re-examine the notion of first-strike policy.

âI would not say we would never use in an offensive way a nuclear weapon, just some sort of unarming unilaterally,â Biden said. ♦