Thereâs a software revolution in America today, and rural Americans need to be armed. 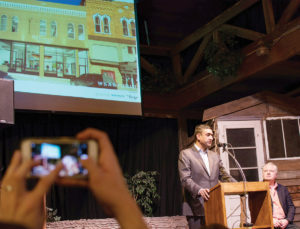 U.S. Rep. Ro Khanna, D-Calif., speaks Saturday, Dec. 8 at History Boy Theatre at the national kickoff of R3 (Revive. Rebuild. Restore.) in Jefferson. Khanna was part of a delegation of Silicon Valley leaders who pledged to include rural America in their vision of the future. Photo by Matt Wetrich

Itâs possible Ro Khanna did more for Greene County, Iowa, in 16 hours on a past weekend than Steve King has in 16 years.

Khanna, 42, a product of rural Pennsylvania who is in his first term as a Democrat representing the Silicon Valley area of California in Congress, shepherded top tech figures to Jefferson on Dec. 8 for a jammed schedule of economic-development events â chiefly the scouting of Pillar Technologyâs transformation of a 19th-century building on the northeast side of the Square into a modern software operation, one that will employ dozens of people with salaries approaching $75,000.

Khanna sees the Pillar branch as a canary in a cornfield â the beginning of a beautiful friendship between the flush titans of tech on the coasts and the pioneering prairie.

âMark down this night because it is the start of a revolution,â Des Moines Area Community College President Rob Denson said.

Yes, partisan politics has left the connection between urban and rural America resembling âThe Bridge On The River Kwaiâ (at the end of the movie when Alec Guinnessâ eyes reveal inner madness as he hits the detonator).

The road back to civility wonât be built with press-release promises, poll-tested messaging â or more savage attacks and counterattacks from Red and Blue America.

The answer is jobs, jobs, jobs â and good ones, says Khanna.

Allen Blue, the co-founder of LinkedIn, spoke here. Heâs inspired by Pillar. So is Kevin Scott, the chief technology officer of Microsoft.

During an interview with this newspaper, Khanna politely paused to give his best to a departing Allen Blue.

âHe came at my request, so I wanted to thank him properly,â Khanna told me.

Khanna, who has visited other parts of rural America in his effort to fill a desperately needed lane in our politics, one that is intent on expanding that software revolution beyond a handful of urban enclaves, works with Republican legislators, too. Heâs about the business of partnerships â and helped Linc Kroeger of Pillar bring a matchless roster of rural Iowa allies to Jefferson.

Having interacted with a Republican congressman in Kentucky on rural revitalization, Khanna asked Kroeger who represented Jefferson in Congress.

That would be Steve King, Kroeger told Khanna.

âAnd I said, you know what, Iâm not going to be able to convince the folks from Silicon Valley to be on the same platform as Steve King,â Khanna said of the Kiron Republican who has built a national brand with inflammatory remarks on race and other matters.

âBecause of the way he has demonized people â demonized immigrants, demonized the LGBTQ community, demonized anyone who doesnât share his particular faith or his background,â Khanna said.

Khanna said King is not the face of rural America.

Khanna said King clearly doesnât represent that American point of view â one Khanna thinks most of the nation shares.

âHeâs become, unfortunately, a caricature of the worst stereotypes that people have,â Khanna said. âItâs unnecessarily hurtful, and itâs not moving the country forward with a single thing we should care about.â

So is the strategy to reach King voters to say: Kingâs a racist, so those voters are racist? Or do you appeal to the voters on other issues?

âNo, itâs saying âI get some of your frustration with being left out, and I get a sense that you need to have basic respect, respect for your way of life,â â Khanna said. âThere are a lot of great things about living in rural America. You get to live with your families. You donât have my existence. My wife is one place with my kids, and I am traveling back to California.

And once that respect is established, Khanna said, the message needs to be about the true competition for all Americans, rural and urban and suburban.

Khanna insists heâs not running for president in 2020 â and he predicts weâll see a field of 20 to 25 Democratic candidates.

Heâs probably wise, with a promising career in front of him, to wait for a future White House cycle, although he has the intelligence and gravitas today to serve ably. In fact, he should be short-listed as a vice presidential candidate for the Democrats right now.

Yes, Khanna represents Silicon Valley, but if you were one of the Iowans sitting in RVP-1875âs History Boy Theatre that Saturday night listening to him, you know this, and know it well: Ro Khanna is representing rural Iowa, too.
The three words Iâll leave you with where Khanna is concerned: I trust him. ♦