Rayâs genius was coalition building; Trumpâs is the surgical precision of his division seeding. 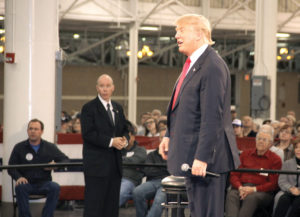 Jordan vs. LeBron. Magic or Kobe?

In beer-and-burger debates at bars around the nation, in ferocious online forums, the GOAT question (Greatest Of All Time) runs into a challenge: How can you compare athletes from different eras? Each time Michael Jordan drove the lane, heâd be bruised and bodied by a mean, muscular Knicks defense. Steph Curry, in the modern era, essentially has a placid moat between him and the defender. Such is the softness of todayâs league.

Same goes for politics. JFK would have been #metoo-ed back to Hyannis Port before he could even have mouthed that first âask not.â

Itâs hard to imagine where my grandfather, James W. Wilson, who served as Barry Goldwaterâs Iowa campaign chairman, would be today on the political spectrum. Would the late Art Neu even be a Republican now?

But, in spite of the times in which they served, itâs hard to reconcile the canyon-sized differences between Gov. Robert Ray and President Donald Trump â both of whom enjoyed strong support in the Hawkeye state. Some of the same people eulogizing Ray are defending Trump in carnival-worthy feats of head-spinning moral relativism.
For all his goodness, Bob Ray, once considered for the vice presidency, could not have weathered the Donald Trump social media gauntlet and come out as, well, the Bob Ray Iowa mourns.

Can you imagine Trumpâs reaction if Ray arrived on the scene in 2018, as letâs say a moderate GOP challenger to Gov. Kim Reynolds, with a plan to provide refuge to refugees from Southeast Asia?

Trump would tag Ray with a whopper of a nickname, something like Hanoi Bob.

âI like countries with winners, folks, and let me tell you, Laos, Cambodia, theyâre losing â full of losers. We donât need more people here in beautiful Iowa from dumps like Vietnam,â Trump would be saying about Ray in Dubuque later this week, were the two men matched in a modern political imbroglio. âSo who is this guy, this Bob Ray, who wants to bring 3,500 of the Rice-landers here. Hanoi Bob, I call him. Hanoi Bob is making a terrible deal for Iowa with this refugee mess. I mean, really, heâs an insurance guy, not an idea guy, a deal-maker like me. I mean, come on, folks, very, very smart businesspeople like me, we donât even pay attention to insurance. Thatâs not real business, thatâs paper work. Plus, Bob Ray is always eating ice cream cones, and he married like the first girl he kissed. America needs toughness, not Ice Cream Cone Bob.â

The emasculating Trump rhetoric would work, and thatâs one of the reasons there will never be another Bob Ray. Rayâs genius was coalition building; Trumpâs is the surgical precision of his division seeding.

Yes, there will never be another Bob Ray. Which would be a tragedy â except it is our fault collectively as Iowans. Car accidents arenât really accidents at all. They are crashes. Someone made a choice â to gun it through a yellow light. Or to drink and drive (once if you are Nate Boulton, twice if Kim Reynolds). Or to vote for Trump.

Every Iowan wants his or her son to grow up to be like Ray. âBob Ray was the Iowan we all want to be,â Daniel Finney wrote in The Des Moines Registerâs lead story on Ray last Sunday.

President Trumpâs biggest weakness, as Ian Bremmer, president and founder of Eurasia Group, noted on Sam Harrisâ podcast last week, is that he cannot lead by example. Even in the 1980s, after reading âBonfire Of The Vanitiesâ and watching âWall Street,â I never wanted to be like Trump.

No, I wanted to emulate the character of my heroes, former Lt. Gov. Art Neu, who served with Ray; and the late Robert Beck, the Republican publisher of the Centerville newspaper who lost a GOP gubernatorial primary to Ray.
Mr. Beck was an extraordinarily interesting man who just found other people more compelling than himself. You could see it in his columns, and itâs no doubt what made Mr. Beck a formidable candidate for governor in the 1960s.

âI lost to a good man,â Beck told Iowa journalist Chuck Offenburger of his race with Ray. Mr. Beck said the same thing to me more than once in different ways, but I wasnât quoting him at the time.

After losing, Beck didnât seek to hold the stage, a la Bob Vander Plaats. He went back to Centerville and busied himself with driving economic development there, including his crucial involvement with Lake Rathbun.

In the end, I think what drove Ray as much as anything is what he learned at Drake University in Sigma Alpha Epsilon, the same national fraternity I would join outside of Chicago a generation later.

All of us in the fraternity memorized âThe True Gentleman,â the economically worded starter guide to life as a man from John Walter Wayland.

Few men, though, have lived up to the creed of the Sigma Alpha Epsilon fraternity like Bob Ray.

âThe True Gentleman is the man whose conduct proceeds from good will and an acute sense of propriety, and whose self-control is equal to all emergencies; who does not make the poor man conscious of his poverty, the obscure man of his obscurity, or any man of his inferiority or deformity; who is himself humbled if necessity compels him to humble another,â Wayland wrote.

Thatâs the essence of Bob Ray and the very antithesis of Trump for whom such words have never been actionable or even aspirational.

All of that considered, in our modern politics, Trump would have nicknamed Bob Ray into obsolescence.

To mourn Ray and indulge and defend Trump is nothing short of graveyard desecration. ♦