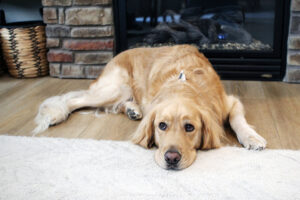 Zac Fox and his wife, Lindsay, have fostered dozens of rescue dogs the past 10 years, dutifully finding them forever homes. But after a decade, they needed a break, as it was emotionally draining.

However, the respite didnât last long. Lindsay arranged to train a puppy â named Kernel â for the Puppy Jake Foundation and give it to a disabled veteran after two years. As a veteran who served 10 years, Fox knew it would be helpful for other veterans and agreed with his wife, despite his âno puppiesâ request.

He and Lindsay trained the puppy. Last year, as he met with his own Veterans Administration provider, he noticed his own anxiety and his PTSD had lessened. The VA asked him what changed, and he cited the new puppy.

âHe asked if I had considered applying for a service dog. I never thought of it,â he recalled. âIn the military, you learned to push through struggles. I hadnât fully admitted to myself the extent of my trauma.â 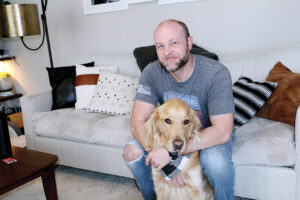 As Kernel helped tremendously with anxiety, he applied, thinking it might be years before heâd get a dog. In October of 2021, the dog he spent two years training became his service dog.

âI was elated,â he said. âKernel and I were already extremely bonded, and heâd helped me so much.â

If Foxâs mind is racing, Kernel lays across his legs.

âIt helps to ground me,â he explained. âItâs like pressure therapy to help regain control. Iâm sitting here and touching a dog and getting a dopamine release.â

He takes Kernel to the gym, grocery stores and out in public. Kernel wears a service vest and Fox educates folks daily, fielding requests to pet the dog. Heâll hand them a business card which says, âI am a service dog. I am protected by law. PLEASE no petting.â

However, much to his dismay, some folks ignore the âno pettingâ request.

âIf people were in a wheelchair, you wouldnât ask them to try out their medical device,â Fox said. âKernel is considered a medical device.â

He deals with questions daily about why he has the dog.

âItâs wildly inappropriate,â he says. âWhen you approach a person with a service dog, youâre asking about their disability.â

When adults and kids ignore his request, he explains that the dog is distracted and not focused on the handler.

âSome people look and talk to the dog and not to me,â Fox said. âApparently, they need ugly-looking dogs to be service dogs, then not everyone would approach us.â

If people are curious about his dog, Fox suggests: âMake a comment and move on. Think about treating people the way you want to be treated.â

âShe used to be my handler. Itâs difficult to love a veteran whoâs been in combat. I wouldnât be here without her.

âPTSD isnât always stress â itâs realizing youâll never be that cool again. I was told I was a hero, but nothing I did felt that heroic. Not only has Kernel changed my life, heâs given my freedom back and changed the lives around me.â ♦