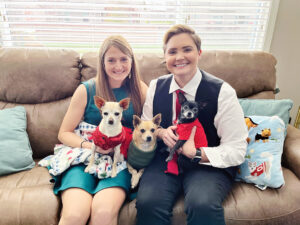 An abandoned street dog, a dog with two broken legs, and another dog weighing only 7 pounds all found love and healing with their new owners.

Sarah Jennings and Kristen Formanek are advocates for adopting dogs, especially of their shared favorite, chihuahuas. Jennings initially was unsure of the breed.

âI never envisioned a chihuahua. I wanted a German shepherd,â she said. âThat changed with Guapo â my first dog. I never went back. Itâs like potato chips â you canât have just one. They have no conception of size. Heâll go say hi to the biggest dog at the dog park.â

Jennings adopted Jimmy at a Midlands Shelter gala fundraiser. They paraded dogs with little outfits at the events.

âHe was so small and was the only dog not adopted from the gala,â she explained.

Their second dog, Lucy, is a Pekinese chihuahua. Formanek received an email from the Animal Rescue League (ARL) about a dog in distress.

âThe picture of Lucy â she was skinny, sad and no color. She was found dragging her legs. We started fostering her. She had double knee surgery after that,â Formanek said.

Lucy and Jimmy bonded during foster care. Formanek is unsure of Lucyâs background.

âWhen we first adopted Lucy, she was very jumpy. We questioned what bad things happened to her,â she said. âBut now, you see the change in her. Sheâs so sweet and funny and not jumpy anymore.â

When another ARL photo hit their inbox, it was a picture of a chihuahua pitbull mix.

âHis front legs hadnât healed, and he was walking on his elbows, weighing only 7 pounds. He was so emaciated, and his ribs were showing,â Formanek said.

They werenât sure of Rudyâs quality of life yet felt compelled to give him a chance, adopting him in 2021.

âIt says that we know that thereâs something wrong with the dog and that weâre OK with that,â explained Jennings. âThey are the ones who need the owners the most.â

Jennings and Formanek also foster crisis care animals. A crisis animal may come from people who have suffered from domestic violence, homelessness or other situations.

âPeople need temporary help. We take the dog until they can find permanent housing or take the dog back,â Jennings explained. âWe get the experience of fostering, without the temptation of getting another dog, as itâs too easy to become attached. Itâs a good learning experience for us.â

The three dogs teach responsibility and provide comfort to their kids.

âRudy is so protective of our son. He watches him play, then jumps on his lap. When the dogs need medications, they tend to take it easier from them instead of us. Itâs cool to see that emotional bond,â Formanek said. âThe dogs feel our moods. If you have a bad day, they know to come and cuddle you.â

In addition to numerous veterinarian visits, they admit to spoiling the dogs. Theyâve taken Jimmy to the Iowa Cubs dogs night, when he wore his Cubs jersey and was featured on the Jumbotron. The dogs are fashion divas, owning about 100 dog sweaters and outfits.

âItâs a great way to find out what type of dog fits with your home,â Jennings said. âAt the end of the day, you feel great. Itâs such a rewarding experience.â n