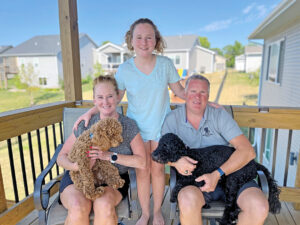 Lisa and Corey Lavigne with their daughter, Taylor, and two dogs.

One Thursday evening at the Valley Junction farmers market in West Des Moines, people of all ages circled around two balls of curly fur with wagging tails. As I clamored to see the spectacle, there sat Reese and Wrigley, two dogs soaking up all the attention.

Reese, with his curly milk-chocolate-brown fur, resembled a huggable teddy bear and was one of the most adorable dogs Iâve met. I longed to snuggle up.

Turns out Iâm not alone in my obsession with these cute dogs. Owners Lisa and Corey LaVigne are interrupted frequently on their walks.

âEvery day, someone stops me to tell me how cute they are and if they can pet them,â Corey said. 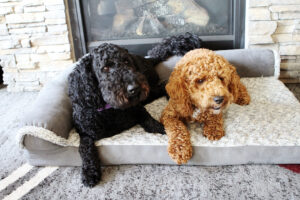 Wrigley is a 1.5-year-old black mini labradoodle, and Reese is a cockapoo that turns 1 next month.

Wrigley is a black mini labradoodle that is 1.5 years old. Reese is a cockapoo that turns 1 in November. Both are âpandemic dogs,â as they were obtained in 2021.

âIt was the perfect time to get another dog. I run my company from home. When COVID hit, it made us pull the trigger. We didnât want to try and train a dog while we werenât home,â Corey said.

Lisa had a previous dog, Bandit, that passed away. Corey had a springer dog, that passed as well. They were without dogs for five years.

Lisa and Corey researched dog breeds, particularly those that got along with kids (and their daughter, Taylor) as well as other dogs.

âI didnât want a dog who shed. Bandit used to shed, and we wanted a hypoallergenic dog,â Lisa said.

Wrigley is named after Chicago Cubsâ Wrigley field. Corey grew up in Chicago and is an avid sports fan. When coming up with a name for their cockapoo, Corey suggested Butkus, after Chicago Bearâs coach Dick Butkus.

Instead, they compromised. Lisaâs momâs last name was Reece; Pee Wee Reese was a baseball hall of famer.

âHe looks like a peanut butter cup, so we named him Reese,â Lisa said.

The pair take the two dogs virtually everywhere. They purchased a Burley bike carrier, which is attached to the back of their bike. The dogs go boating in Okoboji, after theyâve put on life vests.

âThey say dogs are natural swimmers, but theyâre not. Many dogs have drowned. Weâve always put our dogs in life vests because if he jumps out of the boat to the dock, he might miss,â Lisa said.

Lisa and Corey take the dogs to dog-friendly establishments. When they were in Florida, they noticed certain beaches allowed dogs. Corey inquired with a dog owner, who suggested an app called âBring Fidoâ and a book, âRuff Guide.â

âWe always check out the places we can take dogs. Weâre shocked at how many places donât allow animals,â Corey said.

Corey explained that, as a veteran, he suffers from occasional PTSD symptoms.

âAlthough heâs not trained formally to do that, Wrigley has helped with PTSD,â he said.

The couple said the dogs are loyal and need to be touching one of them.

âI like it when I come home and they give you unconditional love by greeting you at the door,â Lisa said. âIt doesnât matter if you have a crappy day; they love you anyway.â n