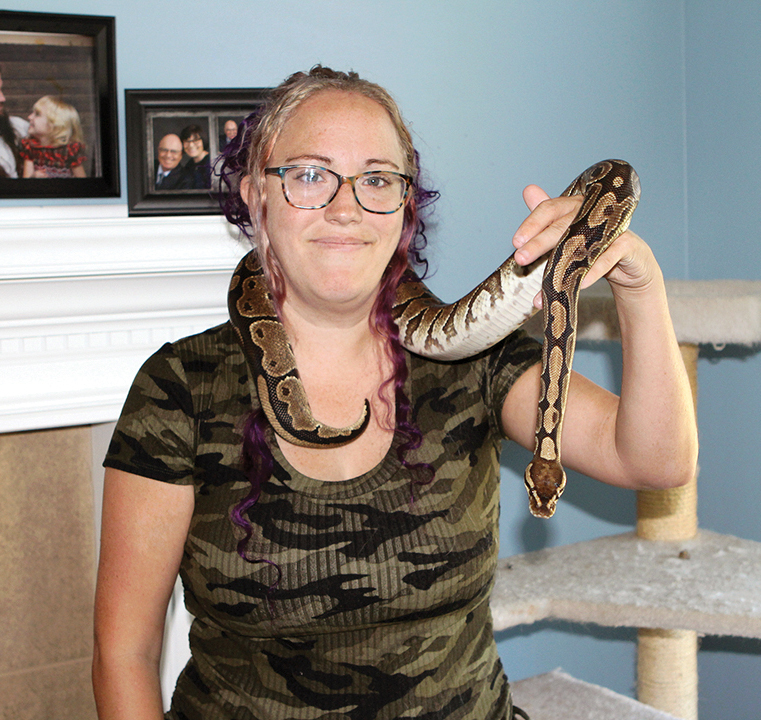 As Hades pounces on Shade, he seems mildly annoyed at the kittenâs antics. Meanwhile, Dresden avoids the spectacle, as heâs had his own tussles with Shade in the past.

Regardless of whether the three cats are getting along, they tend to avoid the other two pets in the home: two ball python snakes, Taneth and Kari.

Pet owner Charlotte Triplett of Waukee had cats since she was young, but she always wanted a snake.

âMy cousin had a snake, but my mom always said no,â she said.

She finally got two snakes six years ago at a reptile show. The pair are sisters, and each lives in its own terrarium. The top of the cage is covered, and a heating pad ensures a constant temperature.

Triplett takes the snakes out every few days to socialize. They feed every two weeks on medium-sized rats, thawed out after being kept frozen. Occasionally, sheâll take Taneth to the pet store or out in public.

âTaneth is better socialized and tends to sit still. She hangs on my neck,â she said. âI love the feel of them.â 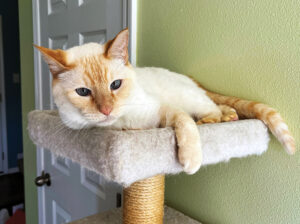 Dresden was found in a live raccoon trap.

Ball python snakes can grow up to 6 feet long and are called ball snakes because they curl up in a ball to protect themselves. Theyâll wrap themselves around an object as a defense mechanism by constricting and tightening, so prey canât pull them apart or attack their head. In the wild, their tails wrap on a branch, which allows them to feel safe.

Triplettâs arm serves as a âbranch,â and Taneth continues to coil and wrap her way around it.

âThey are constrictors who like to give big huggies,â she said.

As friends come to visit, the snakes have admirers, but some folks are petrified.

âSome people are afraid and canât even look at a snake, so weâll cover up the cage. A majority of people will hold snakes. We try to make people as comfortable as possible,â she said, later adding: âMy 5-and-a-half-year-old daughter will help feed the snakes and hold them on her lap.â

Triplett likes the feel of the snakes and dispels a myth. 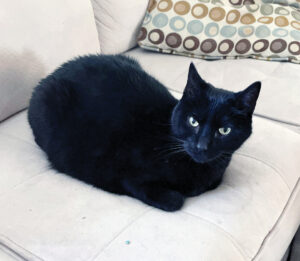 Hades was adopted from the Animal Rescue League.

âA lot of people think snakes are slimy. They arenât. They have scales, and you can feel the muscles more. Everyone should like a snake or try petting one.â

(Authorâs note: I hesitantly touched Taneth, which felt like a soft leather purse. One five-second touch was enough for an admitted snake-avoider).

The snakes are not poisonous; however, they may strike if feeding or if they feel threatened. Triplettâs husband was feeding a snake a rat when it struck and accidently hit his hand. The cats typically avoid the snakes.

Triplettâs three cats are rescues. The family found Shade abandoned as a kitten. Dresden was discovered in a live racoon trap. The veterinarian thinks Dresden was abandoned because he appears cross-eyed. Hades was adopted from the Animal Rescue League. Her family will take the cats in public, putting Hades on a leash, which makes folks do a double take.

Shade and Hades are both black, a color of cats she loves.

âA lot of black cats are left abandoned because they are void. I wish more people would give black cats a chance,â she said.

In the past, the Triplett family has owned fish, rats and other unique pets. The three cats and two snakes are great companions for their family, Triplett said.

âThis is enough pets for me â for now.â ♦