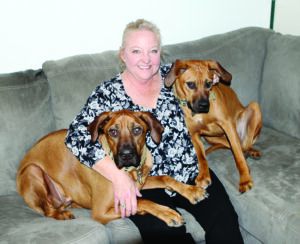 There are only 2,000 Ridgebacks registered with the American Kennel Club in the U.S., but Kelly Read (pictured) and her husband Larry have two of them.

Two dogs, originally bred to keep lions at bay and protect hunters in Africa, have made their way to their new home in Altoona.

Winnie and Walter are Rhodesian Ridgeback dogs. Their owners, Kelly and Larry Read, obtained the half-sibling dogs from Texas. The dogs are 1 and 2 years old.

Rhodesian Ridgebacks are named for a ridge on the back, a long strip of backward-growing fur down the center of their spine. Ridgebacks contain Great Dane in their blood lines.

The breed was originally a guard dog that would travel in packs. If needed, theyâd chase lions, but not attack them, and protect their owners. The Reads thought the breed was unique as itâs only been in America since the 1950s. There are only 2,000 Ridgebacks registered with the American Kennel Club in the U.S.

Shortly after they received Walter as a puppy, he had a dermoid cyst the size of a tennis ball on his back. Kelly brought him to the veterinary clinic at Iowa State University.

âThe vet had never seen the breed before,â she says.

The two dogs are named after famous Africans, Winnie Mandela and Nelson Mandelaâs cellmate, Walter Sisulu. The siblings get along well. Both have a lot of energy and canât be kenneled. Kelly takes them to doggy daycare on opposite days so each one can get a break from one another. 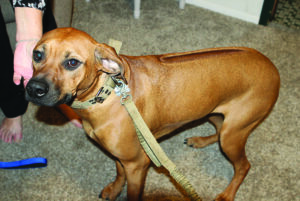 âThey are the favorites at the daycare,â assures Kelly.

The dogs each have personality. Both are alert and strong-willed but loyal and protective of Larry and Kelly. When outside, theyâll chase rabbits and squirrels.

As I came in their home, the pair barked loudly, but hesitantly came to me. The piece of cheese I tossed to Walter helped me make a friend. But as I tried to take Walterâs photo, he didnât like the large black camera. Every time I held it up, heâd turn around silently and walk to the kitchen. It was comical after the 10th time of turning his back on me.

When Kelly takes Winne and Walter on walks, many people are intrigued with the strip of fur down their backs.

âPeople often think the ridge is raised because they are mad, which has nothing to do with it. They walk with their tails tucked, not because of dominance but protecting themselves until they feel safe,â explains Kelly.

The dogs detest rain or walking in dew-filled grass.

Both Larry and Kelly have been dog lovers all of their lives, mostly adopting dogs from the ARL, including a husky, a poodle, a Maltese, a Chihuahua and a chocolate lab.

âIâd be happy to adopt if I could find a Rhodesian,â says Kelly. âYou just canât find them around Iowa.â