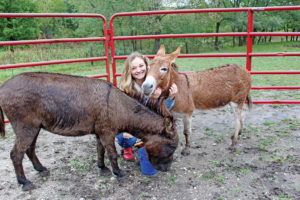 Silvia Verhofste enjoys hanging out with her miniature donkeys, Shaymus and Ginger.

When Silvia Verhofste was in fourth grade, she tucked a baby goat in a basket and took it to school for show and tell where her classmates excitedly gathered around her to pet it.

The next year, she brought another baby goat into her bedroom to nurse it back to health after the mother rejected it. She did the same with a calf, bottle feeding it and nurturing it indoors â much to her dadâs dismay â until it could survive on its own outside.

Then, at age 16, she went to the Iowa State Fair, admired the miniature horses and asked her parents for one as a birthday gift. She was told that they were too expensive, so she researched other animals and instead changed her request to a miniature donkey.

But not just one donkey. It had to be a pair of donkeys.

âYou canât just get one donkey because they get depressed and bored if theyâre all alone,â she says.

Her parents agreed, and she adopted Shaymus and Ginger.

The family obtained them from a breeder in Minnesota that had a trailer that said, âhauling ass.â At the time, the donkeys were about the size of a medium-sized dog.

âThey were so cute,â she says. âI like the idea of a small animal.â

She says taking care of them is fairly easy, unless she has to move them to a different grazing pasture.

âWhen they have to get up to move, theyâll just sit there and do nothing. Theyâre stubborn,â she says. âThatâs why my dad doesnât like them; theyâre too stubborn.â

âSometimes theyâll act like a horse,â she says. âI wonder if they donât know theyâre smaller. They act like theyâre big animals.â

The donkeys share the farm with horses, sheep, cows, goats, dogs and cats. Silviaâs mom, Hilde DeBruyne, says when all the animals graze in the pasture, the farm resembles a âfarm safari.â She believes the animals and farm life helped Silvia and her brother connect with nature.

âMy kids have learned so much,â she says. âBaby animals are cute, but after a few weeks, they grow up. Thereâs still work to be done. You can teach kids about life, but they have learned through animals that sometimes the runt might not make it.â

Silvia studies psychology and pre-med and hopes to incorporate pet therapy into her practice. She says her pets give her comfort. If others consider adopting a donkey, she gives this advice.

âGet more than one,â she recommends. âYou wouldnât want them to be sad. Itâs so easy to give them lots of love.â ♦