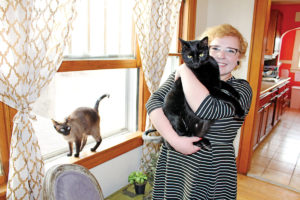 Amy Wonderlin holds Binx, a cat her roommate found in college. Her roommateâs cat, Luna, is perched on the windowsill in the background.

When it comes to animals, Amy Wonderlin â and her mom â just canât say no. Her home now includes four pets.

When Amy attended school at Central Campus, a turtle from her classroom needed a home at the end of the school year. She brought Chomper home first and then asked her mom if they could keep him. She agreed and kept the friendly painted turtle.

âTurtles are very social,â explains Amy. âThey donât like being picked up, but they like having you around.â

As we walked to the aquarium, Chomper waddled over from his basking rock. He stuck out his striped yellow and green head and followed us as we strolled over to greet Amyâs next pet.

Two parakeets flapped and squawked in their cage. Amy opened up the cage and offered a sprig of millet in one hand to lure Tilly out. She cupped the flapping Tilly, while Flynn, the other parakeet, hung upside down in his cage.
âIâve always wanted birds. Theyâre pretty easy to take care of,â says Amy.

Soon, Tilly flew over Amyâs head and smacked itself on the side of the wall. Luckily the door was shut so pet No. 4 couldnât get at it.

Binx, an all-black cat, didnât bother the birds as he napped in the sun. Binx originally arrived in Amyâs life as a stray. Amyâs college roommate found it hiding in a hole close to their house in Cedar Falls.

âWe named him âLucky Binxâ because heâs lucky we found him and gave him a second chance,â she says.

But Amyâs landlord didnât allow pets. She hid it for a while and told her mom she was babysitting it and asked if she could keep it for a while.

âMom took one look at him and immediately said sheâd keep him while I was away at college,â she says.

Amy loves all types of animals, and she began to question what to do with them after they died.

âThey have funerals for humans â why not celebrate animalsâ lives? I wanted to make something beautiful out of (their life),â she says. 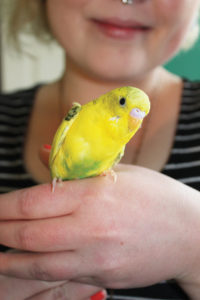 Wonderlin lures her bird Tilly with a sprig of millet.

As a result, she learned taxidermy and likes preserving various animal parts. She made a fox tooth broach for her grandma, who proudly displays the jewelry, telling friends her granddaughter made it from a fox.

Taxidermy is a self-taught hobby, and Amy says she had to develop a stomach for it. She mostly uses roadkill.

âMy friend brought me a dead raccoon, so it was a challenge for me to do something with it,â she says.

A stack of bones in her former house was dubbed the âboneyard.â

Amy says she doesnât have a favorite pet, since all have different personalities. Sheâll continue to have as many as possible. She says her pets are wonderful for providing comfort and companionship. Binx hung out with her while she suffered from pneumonia.