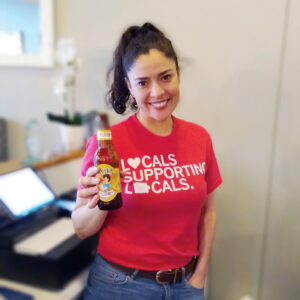 Mariela Maya is a Peruvian-born restaurateur who opened her dream bistro just before the pandemic and somehow managed to keep it alive by sheer determination, personal will and the help of good friends and family. She is now about to open a second restaurant, which, like her first, will bring entirely new cuisine to Des Moines. We asked her to lunch, and she suggested we meet at Panka, her cafÃ© on Ingersoll.

Peruvian food mingles more different culinary influences than most any other national cuisine. Why is that?

âBecause Peru accepted so many influences from both Asia and Europe, and from indigenous people, too. Chinese immigrants, then Japanese are a big part of Peruâs population and food. So, of course, is Spanish. The Incas were growing all kinds of different potatoes long before Europeans knew about them.â

Incan precursors domesticated the potato 8,000 years ago. It only found its way to Europe about 80 years after Columbusâ first voyage to the New World and 40 years after Francisco Pizzaroâs confrontation with the Incas. Maya serves a mashed potato dish like Chinese serve rice and Italians serve pasta â with any imaginable kinds of toppings.

Pisco is the national spirit of Peru. Is it made with potatoes?

âNo, itâs made with grapes. Itâs really a brandy. It uses the same distillation process, but it can be made in three months. (By law, cognac must be aged at least two years but many are seven to 20 years in oak barrels.) Our piscos are made from Quebranta grapes, but others are also used. They are grapes that grow in Peru and Chile. In colonial times, imported brandy was very expensive, so Peruvians made their own. Now itâs exported to Spain and Des Moines.â

Gaston Acurio, who probably has done more than anyone to take Peruvian cuisine international, talks about Nikkei and Chiffa cuisines. What are those?

âNikkei comes from the Japanese and includes both cevicherias and pollorias. Tiraditos, I call them sashimi with Peruvian spices, and ceviches are our most Nikkei dishes. Chiffa is Chinese-influenced and best known in Peru as lomo saltado, a stir-fried beef dish, which is practically the national dish of Peru. Steamed dumplings, ours are made with shrimp and chicken, are another Chiffa dish. Arroz norteno is, too. Ours is made with pork belly and Criolla sauce.â (Salsa Criolla is like a pico de gallo with more ingredients.)

Tell us about your ceviches. They are different from the Cuban-influenced ones we are more familiar with in Iowa.

âOur basic ceviche is called Peruano and is white fish in leche de tigre (ceviche marinade of citrus juice with onions, peppers, cilantro). Mixto adds corn and mixed seafood. Cremosa adds shrimp, corn and sweet potato. Tropical adds guindilla (a mild Basque chili), salmon and kiwi. We have one that adds salmon, avocado and mango. Another one mixes in chicharron (pork skin). One is vegetarian.â

One item on the menu is a recipe from Mayaâs grandmother.

âYes, itâs a Lima Creole favorite made with chicken, aji peppers and creamy cheese and served with mashed potatoes and rice.â

There is a dessert at Panka called lucuma meringue. What is that like?

âLucuma isnât really like anything else. Itâs a superfood that is native to Peru. It looks kind of like an avocado, but itâs much sweeter. (Some people compare its flavor to maple syrup and butterscotch.) All our desserts are popular Peruvian dishes.â

How did Maya find her way to Des Moines?

âI grew up in Lima and moved to the U.S. 20 years ago. My husband then had friends in Rockford, Illinois, so thatâs where we moved. I had a 2-year-old daughter, and I spoke no English at all, so I threw myself into learning it. Then I spent five years working for Holiday Inns and then three years in real estate. I knew I liked the hospitality industry. I had two sisters and a brother-in-law who had restaurants in Columbia. Hospitality is in my personality and also the Peruvian personality. Everyone is family. I talk to all my customers; I even know the names of all their kids.

âI got divorced and, because I knew people who lived in Des Moines, I moved here. When I knew my dream was to open my own restaurant, my brother-in-law and sister came here to help me set up and learn the basics. I have always had great family support. I opened Panka in February 2019. Then the pandemic hit. I did not know how I was going to make it, but I was determined. I kept things going with just two employees. I did every job â I washed dishes, cleaned tables, fixed broken stuff, waited on people, took reservations, ran the cash register and cooked.â

Her family has grown.

âI have a new, wonderful husband. Heâs from Venezuela. I have three kids now, 22, 18 and 16. But, in many ways, my employees are my family, too. We do everything together, and we are mostly women.â

The music seems like a big part of the atmosphere?

âYes, thatâs bossa nova. Itâs not just Brazilian; there is bossa nova all over South America.â

How will the new place be different?

âThe music will be chicha, for starters. Thatâs a combo of Andean folk music and cumbia. Itâs popular in Lima. The art at the new place is chicha, too. I met an artist in Lima named Monkey who does chicha art. It is all original.

âWe will be a chicken place. Peruvian chicken is rotisserie but with coals, not gas or electricity. We will marinate 24 hours. Itâs a smaller place with just 32 seats. We will sell chicken and pork belly sandwiches and sausage sandwiches with fried potatoes on top, plus salads. We will have beer and wine, and because itâs by Drake, we will be open late â till 11 p.m. on weekdays and till 1 a.m. on Saturday and Sunday. ♦