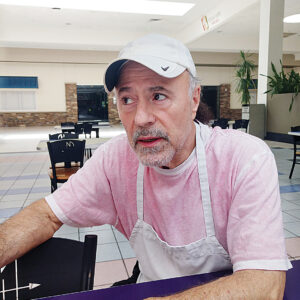 Jerry Talerico is the dean of local chefs. He was the first Iowan to attend the Culinary Institute of America (CIA). He grew up in his fatherâs legendary restaurant Vicâs Tally Ho where steak de Burgo was on the menu before anywhere else. He owned Sam & Gabeâs, a legend in its own right. Today he is running Tally Ho To Go in the Merle Hay Mall food court. After ordering spring rolls from Vietnam CafÃ©, tamales from Tamales Industry and ox tails from Joppa Experience, we talked about 60 years of restaurant history.

First of all, how did Talerico get back into ownership years after selling Sam & Gabeâs?

âWhen COVID began, my daughter, Sophie, returned from the east coast. She wanted to do some catering and started asking me to fix a few things. I knew there was a temporary space open in here from David Ladd of Stuâs BBQ. We started selling lasagna and chicken asiago curbside. When the shutdown eased, Sophie went back to Cape Cod, and I leased a permanent spot here. I asked her if she wanted to come back, but she stayed out east. For the most part, this is a one-man show with my son, Sam, helping out up front.

âThis spot, I think it was once a Sbarro, had an oven and a three-compartment sink. I bought a stove and other stuff at Samâs Club, so I opened without much expense. People are patient about what I can do working alone, and Sam is good about managing my time.â

âIt still sucks. Weekends are keeping me going. Des Moines is a weekend town, and I discovered I can sell steak de Burgo out of a food court. Pizza is a bestseller; few places sell slices, so that helps. But I get orders for fine dining dishes, too. I guess I still have some speed in me. I have to watch it, though. I had some bleeding ulcers and ignored the warning signs. After falling down, I finally went to a doctor and ended up in hospital with severe anemia. My hemoglobin was down to 4.â

How has the Des Moines restaurant scene changed in 60 years?

âI grew up old school. Babeâs, Rockyâs, Christopherâs, Noahâs, Dadâs, Chuckâs. I had my early dates with my wife at Ginoâs. Those were elegant places with carpeting and tablecloths. When customers know the owner will be there, they are confident they will have a good experience. Babe closed his downtown restaurant rather than keep it open without his presence. Chuck, and later Linda Bisignano, were always at Chuckâs. Red and Joe Giudicessi at Christopherâs. Gino Fenu, too. Guido was there at his place.

âGuido had that European air. People loved that. David Baruthio had it, too. I heard that, in France, and now Switzerland, he goes by David, as Americans pronounce it. But in Des Moines, he was Da Veed. That helped him. People gobble up that European air.

What else made the old school restaurants so attractive?

âThey had an emotional pull. The rapport with owners and long-serving waiters like Sybil at Ginoâs. They were special places to go. You didnât use tablecloths at home. Musicians like Fred Gazzo had an emotional draw. People want to go out and be transported to another time and place.â

What was not so good about the old days?

âDrugs and alcohol were a real problem in the kitchen. Johnny Compiano told me he had to have a hotel room free in case his chef was too drunk to go home.â

âI love Harbinger. Joe Tripp is a great chef. I donât even order. Everything is so good, I let them surprise me. I would love to have worked under a great mentor chef like Joe did in Denver.â

Most people who go through culinary college do so with the dream of being able to work in any number of glamorous places or resorts. What drew Talerico back to Des Moines?

âIncidentally, I went to CIA in part to free myself from the need to depend upon alcoholic chefs. After school, my wife and I were working in Cape Cod. When our first child was born, we felt a draw. My wife had a wonderful relationship with her grandparents. I never met mine. I wanted our kids to have a good relationship with grandparents.â

Does the Iowa State Fair still have an emotional pull?

âThe Fair is amazing. Joe Giudicessi told me that his concession stand at the fair grossed more money in 11 days than his restaurant did in a year. People just plan on splurging there and eating everything they want. I heard that $28 lobster rolls sold like hotcakes last year. I would like to sell de Burgo on a stick out there. Pete Cownie wants me to make de Burgo tips. My son, Sam, wants me to make a de Burgo burger. I might. The seasoning can be used anywhere. Like nachos. They sell well, and I think they will sell to go with sauces and instructions.â

What made the Tally Ho steaks so memorable?

âSarge Rand was the chef, and he had an 8-foot, glassed-in charcoal grill. His dad, Augie Rand, had the Schlitz distributorship when that was the bestselling beer. Sarge kept his coals lined up to sear at high heat and then slow cook to finish.â

What local places did Talerico work in before opening Sam & Gabeâs?

âI worked at Christopherâs and at the Tavern. I worked with Angelina Tancredi at Anjoâs. I worked for Bill Wimer and Larry Scalise when they opened Garboâs. That was a hot spot on Ingersoll. Finally, I decided that if I worked for myself, I would be sure to leave on good terms. Maybe that is why I am running my own place again.â ♦