Catch Des Moines CEO says we have a chance to experience another âRoaring Twentiesâ decade. 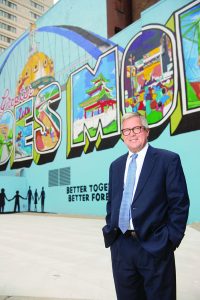 Greg Edwards is president and CEO of Catch Des Moines, the organization previously known as the Greater Des Moines Convention and Visitorsâ Bureau. With the metro finally beginning to emerge from the viral sleep of stagnation, paranoia and closed shops, we asked him to lunch recently to discuss whether itâs soon enough to start thinking about a serious bounce back. He chose Buzzard Billyâs, a locally owned, mostly Louisiana cafÃ© that is the closest restaurant to the Iowa Events Center and Wells Fargo Arena, places that Catch Des Moines works with closely to keep Des Moines buzzing.

âI love the entire Full Court Press restaurant group. Every concept is unique and adds to the city character. They are also mostly Iowa guys, many from Carroll, who totally support Iowa products,â he said.

Indeed, the Buzzard Billyâs tap looked like it included as many Iowa craft beers as the Hawkeyes or Cyclones dress football players for home games. This is a sports bar with lots of polished wood and comfortable seating, plus social separation between booths.

New to the menu was breakfast, served daily from 8 a.m., a good sign that downtown Des Moines is returning to business. BBâs is the only place I know of in town that serves an alligator salad, amongst many other things. I recalled that, when the cafÃ© opened in this current location, they were a floor above a simulated rock climbing gym.

âI think that craft beer and rock climbing liability were not an ideal pairing,â Edwards suggested.

In what ways is the emergence from COVID different from pre-viral days?

âOne big thing so far, and I wonder if itâs here to stay, is that hotels are experiencing higher occupancy rates on weekends than on weekdays. In other words, the leisure traveler is leading the hotel comeback, not the business traveler. Thatâs a start, but we really need to get people back downtown working in the offices, not trying to work from home. The Des Moines airport just reported that recent business was back to 75% of what it was two years ago. Leisure travel is a big part of that, too,â he said.

Convention and visitorsâ bureaus have been around, everywhere, for decades. What inspired the change to âCatch Des Moines?â

âWe did a lot of research and found out that most people did not know what a CVB was. They also thought that, because it included the word âbureauâ in its title, it was a government agency. So, they were not as apt to use our information services because they thought we were a bureaucracy. We noticed that the three most popular new names for former CVBs were âExperience â¦â âVisit â¦,â and âDiscover â¦â We just thought that âCatch Des Moinesâ sounded better. Of course, detractors joked âCatch what, disease?â â he added.

What events click the most with the local economy?

âOur biggest-ever events have been the NCAA basketball and wrestling tournaments. Track meets are a huge draw. When the Junior AAU Track meet comes to town, every five years, we have to get Ames hotels involved to accommodate the big crowds. NCAA track and the Drake Relays are big, too. Youth soccer tourneys are a boon, and they get bigger every year. When a big-name singer like Garth Brooks plays multiple shows here, itâs huge. McCartney, the Eagles are great draws. The World Pork Expo is back this year, and it will bring more like 10,000 visitors instead of 25,000, but itâs great to have it back.

âNow that we have a state-of-the-art skate park, we have the Dew Tour coming to Des Moines with 300 athletes from all over the world, plus many more in support staffs. Itâs also an Olympics Trial, and that impresses a lot of people. For the first time this year in decades, we will host the National High School Rodeo Championships. We expect that to draw 1,200 cowboys and girls and more than 300 fans to the fairgrounds. We have several amateur basketball tourneys coming to Hy-Vee Center this summer. For the first time, the National Ethanol Convention is coming to Des Moines. They are moving from the Twin Cities because we built the Hilton hotel, connected to the arena.

âOf course, the Iowa State Fair is back again, and so is the Principal Classic golf tourney. We also expect 3,000 athletes here this summer for our Iron Man competition,â he said.

How did Des Moines get the state-of-the-art skateboard park built?

âThat fit a civic need. For decades, the city has badly wanted to recruit more young workers. This is a youth sport, so it fit. The Amos Group pushed for this for 15 years, and then with Christine Hensley and Angela Connally getting on board, it happened, with a huge thanks to the Lauridsen family. That was three to four years ago. They were able to build an advisory board of people who get things done.â

For some reason, in the last four decades, Drake sports have not been given the same type of media attention in Des Moines that other non-state schools like Creighton in Omaha, Dayton in Dayton, Bradley in Peoria, Gonzaga in Spokane, and Tulsa in Tulsa get. Why isnât Drake Des Moinesâ team, like those other schools are in their hometowns?

âI grew up in Peoria, and I agree that Bradley gets more attention in its hometown than Drake does. Maybe itâs because Iowa State is so close to Des Moines,â he guessed.

Restaurateurs have told me that they first noticed a comeback of travelers with the state high school wrestling meet. Even with limited attendance inside, lots of fans and family came to town, mentioning that they were ready to bust loose. Is that a real thing?

âI think so, people are certainly ready to go out with other people again. I think that we have a chance to experience another âRoaring Twentiesâ decade. Things are similar; 100 years ago they were returning to normal after World War I and the Spanish flu,â Edwards observed. ♦