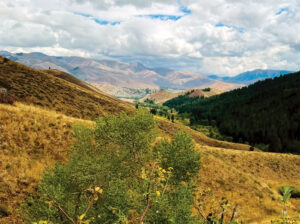 âItâs somewhere in here,â says my friend as she turns her car into the small cemetery, âbut Iâm not sure where.â

No one is around. The smell of aspen trees is tangy and sharp. The surrounding mountains deceptively invite an easy afternoon walk. The clouds roll in and roll out. All is quiet but for the squawk of a black-billed magpie jumping from branch to tombstone and back again.

Ketchum, Idaho, is a million miles from Des Moines, Iowa.

My friend and I circle a little further back through the headstones looking for Ernest Hemingwayâs last resting place. I am expecting some kind of larger-than-life human statue or a giant bull of granite or at least a gargantuan fish in concrete. Hemingway, on all accounts, was a larger-than-life man. He should have a larger-than-life grave. I mean, really, he wrote of war and romance and bull fighting and Paris and hunting and an old man catching a giant fish. Hemingway, in my mindâs eye, is a man weathered by life and drink, not necessarily good company, but still shaking his fist at the heavens. And, by the way, not a bad writer.

âFish,â he said softly, aloud, âIâll stay with you until Iâm dead.â

Hemingwayâs old man in âThe Old Man and the Seaâ is not a wilting flower. He is a bruiser. And when I first read that story as a late teenager, I was empowered. If the old man could have honor and grace and courage in the face of certain defeat, darn it all, I could ask a girl to prom. And I did. Hemingway was my cheerleader.

So where is that grave? 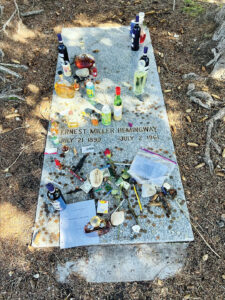 My friend leaves word up at the local bar that Iâm interested in Hemingway. Itâs the Pioneer Saloon in Ketchum, Idaho. The saloon displays a trove of Hemingway memorabilia. After we finish a beer, the owner, Duffy Witmer, appears at our table and tells us tales, tall or not, and âcertainly not to be printed,â about Hemingway, his kids, his guns, his legacy and ânever-before-told facts.â Duffy, not a young man, is a winking leprechaun, and we are charmed. Another beer please.

âOh, Jake,â Brett said, âwe could have had such a damned good time together.â Ahead was a mounted policeman in khaki directing traffic. He raised his baton. The car slowed suddenly pressing Brett against me. âYes,â I said. âIsnât it pretty to think so?â

âThe Sun also Risesâ was Hemingwayâs debut novel in 1926, portraying the âlost generationâ that survived the horror of World War I. The story revolved around Brett and Jake, who loved each other but could never consummate that love because of Jakeâs war injury. The story hit a nerve later in college when I felt lonely and deformed by cystic acne and self-consciousness. âMe, too, Jake, me, tooâ was my conceit, as the car drove off with me squeezed in-between Jake and Brett.

âI see something over there.â And we circle around to a flat grave between two aspen trees.

Later in life, I would travel to Paris with my wife and Hemingwayâs posthumous book, âA Moveable Feastâ â about Hemingwayâs experiences with his first wife in Paris and with the painters and artists and writers who were working in Paris during that time. I traipsed around the west bank of the Seine pretending that I, too, was a young writer in the 1920s. I ignored all of Hemingwayâs catty criticisms of fellow writers and instead focused on the places he mentioned, the food he ate, and the wine he drank. I wanted to live in a garret. I was thrilled.

Hemingway committed suicide at his Ketchum home on July 2, 1961. He was 61 years old and was in physical and mental pain from a lifetime of injuries â shrapnel wounds driving an ambulance in Italy, broken bones from various car accidents, crushed vertebra and ruptured liver, spleen and kidney and first-degree burns from two plane crashes, and at least nine concussionsâ¦ and from life.

In Lillian Rossâ article in 1950 in The New Yorker, 11 years before his death, Hemingway says to her:

âOnly suckers worry about saving their souls. Who the hell should care about saving his soul when it is a manâs duty to lose it intelligently, the way you would sell a position you were defending, if you could not hold it, as expensively as possible, trying to make it the most expensive position that was ever sold. It isnât hard to die.â

Without a doubt, the criticism of the man and his writing was there from the beginning. âToxic masculinityâ is the typical critique. More recently, in âThe Daily Beastâ in 2018, Allen Barra wrote âWhy the Hell are we Still Reading Ernest Hemingway?â Barra reviews biographies and articles and Hemingwayâs letters and concludes: âLong before a subdural hematoma suffered in a 1944 auto accident, after which his alcohol-fueled behavior became increasingly irrational, Hemingway was a bully, braggart, and myth-monger.â Ouch! Barra also finds that most of Hemingwayâs writing is not very good â with the exception of his short stories.

George Plimpton interviewed Hemingway for the Paris Review in 1958. Hemingway talked about his writing and concluded:

âRead anything I write for the pleasure of reading it. Whatever else you find will be the measure of what you brought to the reading.â

And isnât that the message? All the judgment of the man and his life is certainly interesting, but at the end of the day, arenât we left with the written word? And, like Barra, you can certainly find that lacking. But if his words change how you think about things, isnât that marvelous?

At last, we find his grave. An unpretentious and dignified resting place. Bottles of liquor and pens and notes and pencils and coins litter the top of the flat tomb. Either an honor or a desecration. Hard to fathom. Like the man himself.

We are silent. The air is still. The sun comes out from the clouds. And the magpie jumps between branches and tombstones. My friend turns and suggests that we get a strawberry shake. So we do. ♦