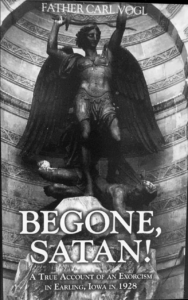 It began when she was 14 years old. Secret voices. Shameful desires. Unholy thoughts of suicide and mayhem. This went on for 26 years until she had enough of the demons and took drastic action.

She went to a convent, was restrained in a bed, and was surrounded by the âstrongest nunsâ the Franciscans had to offer. All well and good, until the Catholic priest began to pray over her. Immediately she lapsed into unconsciousness. Her eyes locked shut. And thenâ¦

âWith lightning speed the possessed dislodged herself from her bed and from the hands of her guards; and her body, carried through the air, landed high above the door of the room and clung to the wall with a tenacious grip. All present were struck with a trembling fear.â

And so began the exorcism of an unidentified woman in Earling, Iowa, in 1928, as told in âBegone, Satan!â by Father Carl Vogl, translated from German in 1935 by Rev. Celestine Kapsner.

By 1936, Time magazine even ran an article about âBegone, Satan!â and noted that the truth of the event was vouched for by a bishop and a monsignor â âHence it was presumed not to err in faith or morals,â said Time.

And what an ordeal it was. Screaming, howling and cursing from the possessed was the norm. The poor womanâs face became so distorted that the nuns had to leave the room because it was unbearably gruesome. And then there was the spitting and frothing and vomiting of âexcrement.â Not to mention the smell.

Exorcisms are not for the weak of heart.

The devils possessing the woman were an impressive cast of characters â Beelzebub, Judas Iscariot, the father of the possessed woman who had attempted to sexually abuse her, and the fatherâs mistress who had murdered four children â just to name the main players. But there were assorted other demons who came and went like âa swarm of mosquitoes.â

Fortunately, the exorcist, the Reverend Theophilus Riesinger, was experienced, tenacious and carried a âconsecrated Host in a pyx upon his breast in order to safeguard himself against injuries and direct attacks by the evil one.â 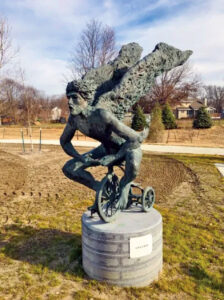 And that was that.

Believe it or not.

Well, 61% of Americans actually do believe it â believe in the devil, that is, according to a Gallup poll in 2016.

Iâd wager that number is even larger today after two years of pandemic, multiple years of climate disasters, and centuries of most people hating folks who act a smidgeon different than themselves. Thereâve been some banner years for Satan.

But does Satan get the last word for the New Year?

What about the Des Moines woman who prepares bags every week with all sorts of essentials and money, then hands them out to the folks asking for help at street intersections?

What about the Des Moines couple who take young women in tough situations into their home and provide a safe place for them to thrive and be loved â forever after?

What about the Urbandale woman who cares for a sick husband, sick kids, sick grandchildren, and then drives to Florida to rescue an ill, elderly aunt?

What about the Des Moines man who sits on so many boards that are crucial to the quality of our lives, reads all the materials, and makes decisions that make our world better â all without pay?

What about the Des Moines man who retired early to take care of his ill, adult daughter around the clock but still has the energy to fight for her care in court after the State refused to help â and then won?

What about the Waukee woman who gives countless hours to support sustainable farming and healthy food for all of us?

And what about the genuine smiles from the staff at the coffee shops, the hardware stores, the restaurants and bars, and wherever I go for groceries?

Really? Smiles? With all these devils running around?

That same Gallup poll in 2016 found that 72% of Americans believe in angels.

Personally, Iâve never met either Beelzebub or Judas Iscariot, and I am not much of a believer in devils. Although reading about the exorcism in Earling did scare the bejesus out of me. Where did I put my consecrated host in a pyx anyway?

But I am bullish on Iowa angels. I know more than a few. Good people. Good Iowans. And so I suggest a new book for Father Carl Vogl: âCome hither, Iowa angels!â