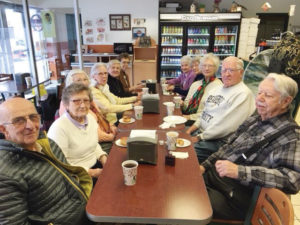 âIâll only give you my first name,â says the dapper old man with the swept-back white hair and trendy suspenders.

âYou see, I used to be an IRS agent.â He pauses. âIâve got too many enemies out there.â

Paul, first name only, doesnât break a smile during this delivery. Sweet-faced Tony, who is sitting across the table from him, seems to bite his cheek to stop smiling.

One glance at this sober group of people with twinkling eyes and sharp wits and you realize that Paul is not alone in this congregation. Better be on your toes if youâre going to sit with this crowd.

Who are these folks?

Come to find out, every morning they all drift north from Holy Trinity to The Donut Hut on Douglas Avenue. Apparently, the combination of prayers and early morning Mass creates quite a hunger for coffee and donuts. They come. They hang out. They talk.

Joyce Ott and Jennifer Laxton are working behind the counter today.

âTheyâve been coming in for a while. We look forward to it. Theyâre nice ladies. I like hearing their stories and stuff. Iâll sit here and listen. I eavesdrop.â Joyce laughs. âTheir husbands are fun, too.â More laughter. 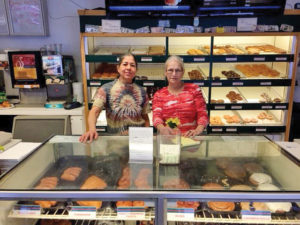 Jennifer adds: âIt makes you look forward to getting older.â

A week earlier, I corralled one of the women from the group, Margaret Durbala.

First, let me warn you that Margaret is someone you might dismiss as just another lovely grandmother-type,
someone to look past as youâre ordering your donuts, the invisibility of older women.

That would be a mistake.

âI was 19 when my mom and dad died,â Margaret states matter-of-factly. âWe have five children. They never got to know my parents.â

My goodness. And where are you from?

âI was born in Beaverdale. Lived there my entire life. In fact, Iâve lived in the same home in Beaverdale for 53 years, the length of my marriage.â

Margaret then adds with a twinkle: âThey canât get rid of me.â

It has not been the easiest life for Margaret.

She says all this with a shrug and almost a challenge â donât you work hard, too?

But there were obstacles for Margaret beyond the reach of hard work.

âI had cancer for a lot of years. Eight different kinds of chemo and radiation. The works. My last radiation was 2012. The more you read about different ways to get better, the main one is socialize. I think that is better than any medicine. I just think it is the best medicine there is.â

âPrayer is a big thing. You know you can get a lot of things taken care of with prayer. You donât have to say a thing. Not even a structured prayer. I know it works. You can start with your family and pray out from there.â

And what about Holy Trinity?

âIâve been with the Church forever. Baptized in Holy Trinity. Married at Holy Trinity. I go to Mass every morning. Recently there has been discussion about transgender people. Listen, you cannot close the door of the Church on anyone. You canât judge them. That is the future of the Church.â

âMy mother loved Jerry Lewis. She would laugh so hard it would just embarrass me. Sheâs been dead all these years, but I can remember her plain as day. I loved my mother.â

âThereâs been a lot of change in Beaverdale over the years. You might as well enjoy it. Life is so much easier when you just go with the flowâ¦ Although, Beaverdale still has no parking.â

Margaret speaks of neighbors and friends and family and coworkers from Mercy Hospital and her Church buddies and the many people who have flowed in and out of her life. She pauses to take a deep breath, looks me in the eye, and smiles.

Back at The Donut Hut, the group is, according to their words, âsolving the problems of the world.â

Children and grandchildren and the latest political malfeasance are on the table. Paul-with-no-last-name wants to show me a bottle of cologne labeled âTrump.â

Jennifer, selling donuts from behind the counter, leans over the glass top and says with a hearty laugh: âListen, when thereâs six or seven of them, they definitely get rowdy.â