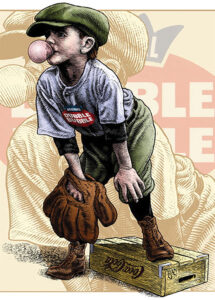 Clint Hansenâs vast artwork doesnât simply hang in a gallery. His artwork is on the side of electrical traffic light boxes in West Des Moines. Find his artwork on a Chicago Bears calendar, off a street in Urbandale or on a wall at Iowa State University.

An Urbandale resident, Hansen has embraced all types of art mediums since he was barely out of diapers. At age 3, his mom noticed he possessed a natural talent for art. And she should have known â she was an artist herself, as was Hansenâs grandfather.

He creates paintings, sculptures, sketches and designs for commercial, public and private art. Whatever the medium, he feels itâs good to have a challenge. His favorite is scratchboard art, in which he scrapes away lines on a black-colored board.

As a child, he sold his first painting of rocks at his momâs art show. He went on to win art contests in high school. When attending college, he wanted to be a neurospace engineer.

âI took a few art classes in college and decided Iâll be poor and do art. Iâd rather make a living doing what I love,â he reflected.

Hansen created a pair of sculptures displayed at the Douglas Avenue and Interstate 80-35 interchange. This one is called âRaise You to the Stars.â

For his first job out of college, he worked in a studio with 12 other illustrators.

âBeing around other artists, you glean from them,â he said. âYou discover you can actually sell your artwork.â

When living in Audubon, he freelanced, creating illustrations and design work. Art representatives contracted to sell his work.

âSelling artwork isnât fun,â he said. âBy having reps bring in jobs, it freed me to be more creative and focus on my art.â

One highlight of his career was when he received a phone call from a woman he didnât recognize. She told him she wanted a portrait of her husband.

âIt didnât make sense until she explained where the painting would be located â at the United States Capitol,â he said. âIt was Jim Nussle, who was head of the U.S. budget committee and also ran for governor in Iowa.â

When Nussle retired, his portrait was displayed in the permanent collection at the U.S. Capitol. In addition, Hansen has made his mark at Iowa State University, where heâs put together three large murals made of mosaic pieces. He also designed a coin for the U.S. Mint, after he won a contest.

Often, heâll see his artwork displayed on a product package or advertisement. 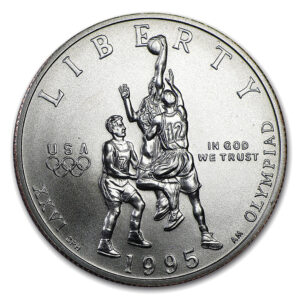 Hansen designed this half dollar coin for the U.S. Mint, in commemoration of the 1995 Olympics in Atlanta, Georgia.

âItâs a big thrill at first. The thing I look at is what I might have done wrong. Itâs not exactly as I hoped it would turn out,â he confessed.

Thatâs the most challenging part of his career: not having enough hours in the day. âThereâs deadlines. Thereâs not enough time to go back and redo it,â he said.

Hansen fields numerous requests for commissioned projects. Some wait for him to complete other jobs; others he refers to another artist. He loves being creative.

âItâs hard to not be doing it,â he said. âItâs easy to get passionate about what Iâm doing. Iâm not the best at being analytical. I like to put the thought into the piece and let it speak through the artwork.â

Hansen is passionate about encouraging young artists, in the same way he was supported early on.

âI didnât do anything to get this (talent),â he said. âIâm grateful I had teachers who were kind and encouraging. Itâs a gift Iâm grateful for.â ♦