Take a drive in central Iowa and look at the sides of large buildings. What used to be drab, gray concrete and brick has exploded with dozens of colorful art murals, courtesy of artist Ben Schuh. 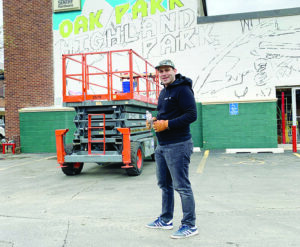 Ben Schuh is the local artist known for âpainting the city.â His work includes the mural in Oak Park and others in the Des Moines area. Photo submitted

Schuh is an artist who is known for âpainting the cityâ and was named CITYVIEWâs best local artist.

Schuh credits his becoming an artist to one of his Grand View University professors, Dennis Kaven. Schuh originally attended college to become an engineer, as he excelled at math, but his brother questioned why. He suggested graphic design and arts instead, but Schuh hadnât painted anything since sixth grade.

âIf I hadnât met Dennis, I wouldnât have been an artist or even tried. He was the mastermind in teaching me. He was brilliant,â recalls Schuh. âI owe my career to Dennis.â

One of Schuhâs first mural successes was at the Iowa State Fair. Folks in Beaverdale contacted him to bid on a project, incorporating the elements of Beaverdaleâs history.

Before he paints the side of a building, he sketches out a rendering of what the mural will look like. He takes clientsâ concepts, incorporating his ideas into the painting.

âAs long as I donât compromise my ethics or copy work, Iâll take their suggestions and do what I want,â he says. âI like to challenge myself.â

âWith Firetrucker Brewery, I had to lift over a fence to get to the wall. I have access to walls others canât get to,â he explains.

He pays attention to the weather forecast. Most paints have at least an hour post dry time to be weather resistant. Occasionally heâll have an assistant â his wife, Morgan.

âSheâs not an artist, but she is skilled at paint by number,â he says.

Being an artist is a competitive career, which is why he strives to look past comparisons to other artists.

âI wasnât jealous but started to question my work. A colleague suggested I put on blinders â to do your work and donât pay attention to those around you,â he says. âArt is subjective. Itâs their option if someone says they donât like it.â

Schuh began as an emerging artist at the Des Moines Arts Festival and has displayed his work for nine years. He feels art in Des Moines is attainable.

âPeople say you canât make a living as an artist in Des Moines. I laugh,â he says.

Schuhâs friends, Tony and Megan, owned six of his paintings, then their various family members eventually owned one, too.

By working outside, he encounters the public, which he embraces. When he painted the Exile Brewing building, a homeless shelter was close by.

âI went out of my way to talk to people,â he says. âArt is readily accessible to anyone. Thatâs what I like about art. Anyone can engage and react to public art.â

Find Ben Schuhâs artwork at Mainframe Studios or on a building near you. ♦