Creating art is her happy place. 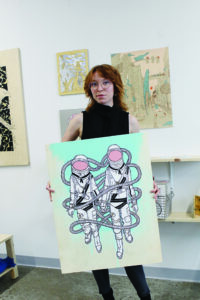 Maddy Fusco enjoys sharing her artwork through social media. Find out more by searching for Maddy Fusco on Instagram and Etsy or visiting her studio at Mainframe Studios. Photo by Jackie Wilson

When Mainframe Studios opened up another floor of studios in March 2021, artist Maddy Fusco eagerly rented a spot. As an illustrator, the new home offers a dedicated space to not only display her art, but to create and sell it.

Her artwork consists of creative illustrations, colored with acrylic paint or ink. Sheâs drawn toward animals and intricate designs with repeating patterns.

Her love of art started early on when her grandma bought sketchbooks for her and her siblings. Her brother is a painter, her sister is a graphic designer, and her cousin is an illustrator. The family often talks shop when theyâre together.

âWe show each other what weâre working on. Having that input is helpful to bounce ideas off each other,â she says.

Fusco began selling her artwork on a whim. She worked as a screen print graphic designer after graduating from the Minneapolis College of Art and Design. One of her friends sold art at the Iowa State Fair, and she displayed her art alongside her friend.

âI discovered people really liked my work,â she says. âIt felt vulnerable, but cool to see strangers interested in my work. It was a nice surprise.â

The sale spurred her to create more artwork, selling stickers, prints, paintings and more. She designed a beer can for Confluence and then painted a 950-square-foot mural in its taproom. Fusco also painted a piano for City Sounds and recently painted a bike frame, too. 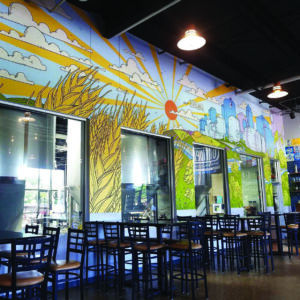 A part-time job affords her daily encouragement as well, while working as a security guard for the Des Moines Art Center.

âI wanted a job I cared about. Iâve been going to the Art Center since I was little when my grandma took me there. Itâs close to my heart,â she says. âItâs my favorite non-freelance illustrator job Iâve ever had.â

Finding inspiration is simple, as she doesnât overthink it.

âI draw whatever I think sounds cool,â she says. âItâs nothing terribly deep; itâs just me exploring an idea.â

One of her favorites is an octopus she drew in college, but she admits she doesnât look back at old drawings.

âMy favorite piece is whatever is my newest,â she explains.

Staying motivated is hard work yet rewarding when the image reveals itself on paper.

âThereâs something satisfying that was only in your head, taking up space, when it finally comes out,â she says. âThereâs a meditative quality to art making. As stressful as it is, itâs also my happy place.â ♦