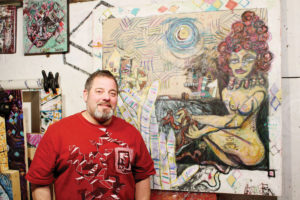 Frank Hansen in front of three, nearly-finished paintings in his home studio. He considers his art âemotionalismâ and paints what he feels.

Donât ask artist Frank Hansen to color coordinate one of his paintings to match the decor. With a mischievous and unapologetic smile, he explains how his unique artwork and vivid imagination evolved into the popular artist he is today.

Growing up on a farm, Hansen realized that objects donât have to be pretty to be painted. After painting a rusty, bent tricycle, his supportive high school art teacher applauded his gifted endeavors.

While attending Grand View University, his professor suggested he follow an art mentor, such as Picasso. He balked, saying, âI didnât want to copy anyone. I donât always want to paint things.â

Moreover, he wanted his paintings to convey his feelings about life events, experiences and his personal viewpoints. His professor finally conceded, as Hansenâs âemotionalism artâ evolved.

âMy professor was blown away,â he says. âHe told me I wasnât really a painter, that I was an image maker.â

He began creating art for things that appealed to him, such as album covers. He painted a backdrop for a Slipknot concert. When he displayed his art early on at RAYGUN, he became intrigued, painting his own custom T-shirts, which is part of his art offerings today.

Hansen was asked to create a mural by the Capitol in downtown Des Moines. With a full creative rein, he painted a brother and sister carrying bees, titled âSarah and Leland With Bees.â Some people loved it; others hated it.

Another man threw a bag at the painting. Hansen hesitated opening it. Inside was a mask with a note simply saying, âThanks for opening the door to public art.â

Since 2005, he has sold his art at Moberg Gallery. In January 2020, heâll display a new art exhibit titled, âYou Canât Brainwash a Filthy Mind.â

He explains the title, saying, âIt means, my mind is mine. Iâm not swayed by outside influences, such as politicians or religions telling me what to think.â

Currently his art is also displayed at the Star Bar. At a coffee shop once, a young boy wanted to move to a different table because of his âscaryâ painting. Hansen simply replies, âI like to be weird and shocking.â

After Hansen works his day job as a plumber, he returns to his home studio, takes a quick nap, and then works on one of his 62 paintings until midnight. As he obtains numerous commissioned requests, people know his work. They tell him to âFrank it upâ â meaning paint whatever inspires him. And that could be practically anything. With a vivid imagination, he admits heâs a weird mix of avant garde and old-fashioned farm boy.

âI donât just paint pictures,â he says. âI paint things that mean a lot to me. Original art is important, and I love doing this.â ♦