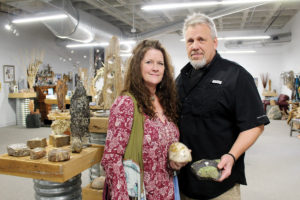 When crafting a story about how the earth was created millions of years ago, the creator didnât post pictures on Instagram or upload Google documents describing the planetâs surface. Only one creative form accurately describes what the earth was back then: rocks.

Some rocks that developed billions of years ago through land formations are still around today. Artists Kim and John Novotny take you on a rock journey at their studio, Light The Earth.

The pair opened up a studio in 2008 in Valley Junction and moved to Mainframe Studios in 2017. The space has a museum-type feel, and it offers various rock pieces, oil lamp rocks, statues and memory art, as well as precious jewelry that is carved from dozens of different stones from all around the country.

Through the years, the couple has collected more than 37 tons of boulders, hauling in truckloads from the Southwestern U.S., as well as their native Iowa and Minnesota.

John creates the rock objects. He says it is an intense process. The cutting and sawing is loud, and debris can go flying everywhere. Smoothing, sanding and polishing custom rocks often takes months. He displays a pieces of various rocks in which one side looks like dirt, but once it is polished or turned over, all of a sudden its inner beauty comes out.

âThatâs how we are as people,â he says.

John wants to expand the way people think about rocks.

âWhen people come in the store, they always want to touch them,â he explains. âStone resonates with people. Over half of the people carry around rocks, and each has their own story of where they picked it up. It connects us.â

Their artwork compels people to think about their connection to the earth, to examine their mortality and expand their minds.

âWhatâs a million years?â he asks. âPut your mind around that and think of a billions years. Itâs a pinnacle art form thatâs been around for billions of years.â

Neither John nor Kim are geologists, they just love rocks. When they started out, a couple took them under their wing.

âOur friends take us wandering in the desert, looking for stones,â says John. âWeâve gone to public land, trying to figure out how to collect rocks legally.â

No part of the stone is wasted. Kim fuses small pieces for jewelry. Her jewelry making has evolved into crafting textile scarves and fabrics out of photos of actual cut stones.

âWe were looking at photos taken by the Hubble Space Telescope of the moon,â says Kim. âWe thought we could do the same, take pictures of our rocks and magnify them. Now each piece is unique art.â

Rocks awaken the beauty in our lives.

âThink about other art forms, you see pictures,â he says while holding up a piece of petrified wood. âBut this is the original stuff. There will never be another piece like this.â ♦