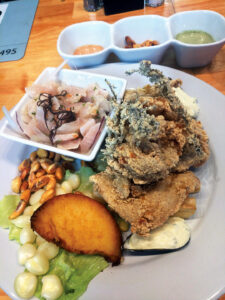 Whether intended or not, Tullpa Restaurantâs name conjures up âtulpa,â a term used in theosophy, paranormalism and mysticism to identify a corporal and sentient body that was previously only imaginary. The restaurantâs logo is âRitmo, Color, Sabor (pulse, color, flavor)â which are certainly sentient qualities, so letâs imagine that is what the name means. Besides, itâs a fun way to go, and Tullpa is all about fun.

This was Des Moinesâ fourth Peruvian cafÃ©. The original has turned into a restaurant supply business, but there are four again. That makes Peruvian cuisine a thing in Des Moines, which is no surprise because it became fashionable in New York, the Bay Area and Florida a couple decades ago. Nobu Matsuhisa, probably Americaâs most renowned Japanese restaurateur, came to L.A. and New York via Lima and used Peruvian techniques to distinguish his cooking from classical Japanese. His black cod in miso is on many gourmetsâ bucket lists.

Peruvian food is often called the original fusion because the cuisine absorbed so many rich styles, from Andean (the birthplace and seed bank of the potato), to Spanish, Chinese and Japanese. Like the Japanese, Peruvian chefs revere seafood. With more than 1,500 miles of shoreline, plus jungle rivers and mountain lakes, why not? Peru is where sushi went to the citrus spa that made it ceviche. Fish and seafood is âcookedâ in lime. Tullpa serves âtraditionalâ ceviche made with whitefish and red onions and served with two salsas, one made with jalapeno peppers and one called âgolf,â which is made with lime juice, ketchup and mayonnaise.

Ceviches here donât stray far from the traditional. No mango or avocado and little seafood. But they are served with many other dishes. That makes for a fresh contrast, particularly with the many fried foods, from seafood and fish to beef, pork, ripe plantains, yucca and potatoes.

The best chances here to sample many flavors are the ronda marina and the ruleta tulpa. The first is a decadent large serving dish in which âcausa de pulpa de cagrejoâ is surrounded by servings of fried fish, fried seafood rice, tiradito (sashimi) in an aji cream, and traditional ceviche. The causa is a classic potato dish in which mashed potatoes are layered between crab meat and octopus, then fried and cooled. Aji is the national chili of Peru, yellow and not too hot. The ruleta features a causa with chicken, flanked by lomo saltado (tenderlojn stir fried with vegetables), chicken fried rice, fried pork or chicken and papas huancaina (potatoes in a sauce of aji-flavored cream and cheese).

Fried fish, chicken, shrimp, calamari and pork are all called âchicharron style,â which means they are breaded in the same delicious crunchy breading as pork skins. âLeche de tigreâ is a salsa of lime juice, onions, chilies and fish juice. It was served in its own glass with one ceviche. Leche de pantera is a lech de tigre with black clams added. It is delicious but not for everyone. Two corn dishes accompany many meals. One looks like roasted peanuts and the other like large lima beans.

The menu lists seven soups, all either seafood or chicken based. Some include an egg, and all are heralded as cures for hangovers. One of the best dishes on the menu was a lentil soup served with either chicken or tenderloin.

Tullpa has a full bar and a sound system that supports its alter ego as a weekend dance club. After 8 p.m., the floor fills up with, in my experience, expert dancers to several different styles of Latin music. That is when dinner becomes experiential, especially if you like dance. ♦