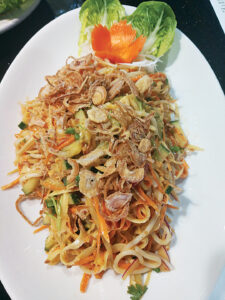 Our first Burmese restaurant has taken a different route. It occupies a former Pizza Hut that has been handsomely remodeled. Though the name emphasizes its full, well-stocked bar, the place is more a restaurant, drawing a family-friendly clientele on my visits.

Burmese cuisine has exploded the last decade in America. The country, now known as Myanmar, has been cloistered for most of the time since World War II. Politically, itâs been a mess. When I visited in the 1960s, the only visa available limited tourists to 24 hours in the country. That was time to eat five meals but not much of anything else. Still, I have thought about those meals for more than 50 years and sought out Burmese cafÃ©s in San Francisco, Los Angeles, London, Chicago, St. Paul and Monterey Park, which is perhaps the greatest restaurant town in America. Urbandaleâs Mingala Bar ranks with any of those.

What is Burmese cuisine? It is a fusion of the food cultures of three neighboring countries â India, China and Thailand. Like Thai cuisine, it is big on multiple, contrasting flavors. A Burmese-American friend says that the motto of Burmese food is âChin, ngat, sat,â which translates as âsour, salty, spicy.â Sometimes the sour can be too much, but that was not the case at Mingala. She also told me that there is a popular rhyme in Burmese that says: âOf all the fruit, mango is best. Of all the meat, pork is best. Of all the leaves, tea is best.â

Those things are well covered at Mingala. Wat Thar with Arloo Hinn presented thick pieces of pork belly with potatoes in a delicious mild curry made with bone stock, turmeric, lemon, paprika, chilies, garlic, ginger and onions. It was served with a green leaves soup with baby eggplant and winter radishes, a small salad of pickled vegetables and jasmine rice. Rice has been cultivated in Myanmar possibly since 11,000 B.C. The Burmese word for rice is the only one in the world that does not derive from Chinese etymology. That leads some food historians to think Burmese rice might be the original.

Tohu Jaw was the best crispy tofu I have ever eaten. The tofu was made from garbanzo beans, not soy. Texture-wise, it was like a perfect French fry, hot and crisp on the outside and soft inside. It was served with a sweet tamarind sauce that disappeared so fast we had to ask for more.

LaPhat Thoke, recommended as âmost popular dishâ was a salad of the venerable fermented tea leaves and âBurmese crunchy mix,â which included sesame seeds, sunflower seeds, peanuts, yellow lentils and garlic chips. Crispy beef salad was the only thing our table ate without unanimous love. Beef was chewy, but cucumbers, tomatoes, sweet peppers and onions in lime juice were tasty. Burma shares a beef taboo with India, and pork, chicken, fish and shrimp are more popular here. Rainbow salad was composed of two kinds of noodles and green papaya with onions. That same tamarind sauce was used to cut the sourness of the papaya.

Zakaw Htamin is the best way to taste many dishes. It is served on a bamboo tray with banana leaf as a plate and includes pork belly, crispy beef, salad, eggplant with dried shrimp, soup, rice and shrimp paste.

Drinks include boba teas, kind of like smoothies. Taro was delicious. ♦