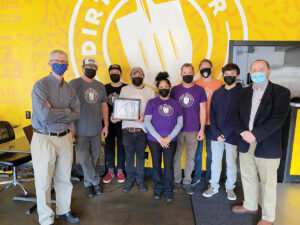 Comedian Shirley Fong-Torres liked telling her audiences that âthe Chinese word for vegan translates as lousy hunter.â Vegan comedian Dick Gregory told folks that âonly the most evolved level of animal intelligence has been able to raise edible foods.â Those two opinions represent 1,000 years of arguments as to whether eating meat or not eating meat is better ethically, morally or physically.

The arguments are often political. Before the last election, many charts were published showing that red states ate more meat and blue states had more vegetarians and vegans. Just before Iowa turned a strange shade of red last month, another election revealed that central Iowaâs food preferences suddenly resemble those of blue bastions like California and Johnson County. Dirt Burger won the CITYVIEW Ultimate Burger Challenge, showing that the phrase âvegan burger jointâ is not an oxymoron and that Des Moines might be more like Iowa City than people in Iowa City like to think.

Dirt Burger occupies a venue that has housed several revolutionary food ideas. It was long a Greek and Italian import store, then a prix fixe Italian cafÃ© Basil Prosperi, a French Bakery related to La Mie, state of the art taqueria Tacopocalypse and state of the art ramen house Krunkwich.

Chef Chris Placeâs (Django, Sam & Gabeâs) menu is as creative as anything that preceded it here. Plant-based (the current PC term) burgers have been stealing market share from carnal burgers for decades now. But they only became something quite good to eat in the last decade. Several companies developed products that made them more popular, among them Morning Star, Beyond Burger and Boca. Morning Star is definitely not vegan. It uses eggs to bind grains with vegetables.

Dirt Burger ran their Chicago burger in the contest. Itâs also my favorite, made with a garlicky patty, giardinera mayo, roasted red peppers, onions, fried pickles and arugula. Probably the most exotic burger on the current menu is the Cobra Kai, made with glazed patty, avocado, scallion mayo, slaw made from shiitake and Brussel sprouts, shishito peppers, and crisped won tons.

The burger menu changes seasonally. Salads are as creative as the burgers with a lemon thyme dressing standing out. Sides include four forms of fried potatoes. Ice cream drinks are made with oat milk.