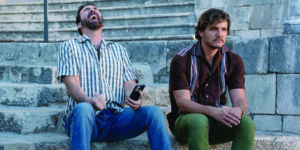 Likely to be a new favorite for any of Nic Cageâs long-term fans or new bandwagoners, âThe Unbearable Weight of Massive Talentâ (âMassive Talentâ) is an entertaining film that doesnât unleash anything spectacular but does a fine job of allowing its leading men to have an absolute blast in a meta-comedy that will be one of 2022âs most genuinely surprising outings.

Starring Nicolas Cage as a fictional version of himself, along with Pedro Pascal, âMassive Talentâ is an amusing deconstruction of the veteran actorâs career that doubles as an action film.

After several decades of movies behind him, Cage now believes he is in a slump and decides to retire from acting altogether. With his funds running low and debts running high, Cage decides to accept an offer of $1 million to appear at the birthday party of Spanish billionaire Javi Gutierrez (Pascal), a self-professed Nicolas Cage super-fan.

Shortly after arriving in Spain, Cage is whisked away by a pair of CIA agents who inform him that Javi is actually a notorious drug kingpin thought to have kidnapped the daughter of a presidential candidate. At the agentsâ insistence, Cage is recruited as an informant to gather intel on Javi, which inevitably forces Cage to re-enact some of his most famous film roles in the process.

As Nicolas Cage playing Nicolas Cage said while developing a Nicolas Cage screenplay (a paradoxical happening in the film that mimics the actual format of this movie), the ânuanced character adult film with heavy dialogueâ portion is where this movie shines â or the first two acts. Itâs an original, creative take that has laughs and over-the-top, but believable, riffs about everything Cage.

Youâve got to give credit to Cage here, fan or not. There arenât too many actors out there who would be this willing to poke fun at themselves to such a ridiculous degree, but Cage would undoubtedly be at the top of that metaphorical list. Not only does Cage play a fictional version of himself but also âNicky Cage,â an imagined variation of his âWild at Heartâ character Sailor Ripley. Where Nic sulks over a meeting that ended in a whimper, Nicky is fired up, flipping his floppy hair, wiggling in his leather jacket, and yelling the reminder that they are âNic FUCKIIIIIIIIIIIIIIIINNNNNNGGG Cage!â With some CGI de-aging bordering the uncanny valley, Cage is made to look 30 years younger, harkening back to the early 1990s when he was firing audiences up as the hot-tempered stud of âMoonstruckâ or the voracious creep of âVampireâs Kiss.â

Cageâs trademarks can be seen in this film, from his random outbursts to his off-putting delivery of certain lines. In addition to all this, the film also functions as an action thriller. This is where Cage embraces his classic action hero persona, recalling his prior knowledge of the characters he has played in movies and using them against enemies.

As Cage and his co-writer super-fan also say, âa blockbuster portion for a wider audience,â the third act action sequence steers this movie toward mediocrity. The third act departs almost entirely from a creative meta-world with comedy to focus on an overdrawn caricature of the action genre. Itâs hard not to see it for what the third actâs real purpose is: pad the runtime. After all, the whole plot about rescuing a politicianâs daughter from a terrorist sounds like something straight out of a cheesy 1990s action flick, of which one would expect to see an actor like Nicolas Cage in the starring role.

Despite this, the film stays engaging enough. There arenât too many actors who would be able to hold their own alongside Nicolas Cage, but Pedro Pascal pulls the job off flawlessly as Javi. Pascal previously gave a comically over-the-top performance in âWonder Woman 1984.â There were times Cage would say or do something odd, and Javi looked as though he was mimicking him right back, almost like a child innocently copying his heroâs vocal style. As the film progresses, we see that Javi really does care about Cage as a person and never comes across as an outright creepy fan holding him against his will.

No matter what film he is in, Cage manages to leave an impression on the viewer regardless of the quality of his performance. Adding to Cageâs already large filmography, âThe Unbearable Weight of Massive Talentâ brings out these signature traits in a clever self-parody of both fame in general and being, well, Nicolas Cage. ♦