âThe 355â mostly succeeds where others have come up short 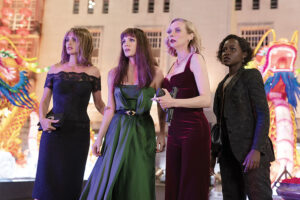 âThe 355,â directed by Simon Kinberg (âX-Men: Dark Phoenixâ), who co-wrote with Theresa Rebeck, is not an instant classic by any means. It is, however, a straightforward and solidly entertaining spy thriller that (mostly) avoids the impulse to pat itself on the back. The premise isnât groundbreaking and is, at times, even a little predictable:

Jessica Chastain plays Mason âMaceâ Brown, a CIA agent who has to join forces with rival agents from other countries to get back a top-secret and highly deadly cyber-weapon that has fallen into mercenary hands.

Those agents include hardened German agent and demolitions expert Marie (Diane Kruger), computer specialist and British MI-6 agent Khadijah (Lupita Nyongâo), and Colombian psychologist Graciela (PenÃ©lope Cruz). The team also has to stay ahead of a mysterious woman who is tracking their every move, played by Chinese actress Bingbing Fan.

âThe 355â hits all the expected beats ably. Like any good spy movie these days, the action takes place around the world. The movieâs use of the locations helped to highlight how female agents can do their jobs in different and unique ways than weâre used to seeing men do.

Their globetrotting brings them to sleek high-rises and crowded markets, they fight in hoodies and in heels, they find an excuse for our heroines to get glammed up at a major auction (all spies deserve at least one black-tie affair in the middle of all the chaos), and they even get to share a beer and a few war stories.

Though some of the plot twists will be obvious to anyone whoâs ever seen a spy movie, the screenplay does manage to spring a couple of surprises as well.

The main characters are a little simply drawn, but the actors give them enough depth to pass. Not only do you believe that these are all smart, capable women (who do a nice job showing you that instead of telling), they also seem like theyâve all lived lives before the cameras started shooting them. Nyongâo, in particular, is a standout as the tech wiz who was trying to move on with her life. Kruger does a great job elevating her character beyond âangry, loner German.â Cruz gets the short stick as the fish out of water, but sheâs still fun to have in the mix.

âThe 355â mostly succeeds where others have come up short because it put the movie and the story first  â not the message. The title of the movie âThe 355,â which might seem a bit weird, is actually a reference to a female spy during the American Revolution, known only as Agent 355, who helped America win the war. Itâs come to represent spies whose identities and accomplishments are never fully known to the public.

Itâs a little suspect when too much is made of a big action movie being âfemale-fronted.â  Unfortunately, Hollywood has decided lately that, in course correcting for decades of gender inequity in certain genres, itâs not enough to just make an action-packed movie starring an ensemble cast of women â they must let the audience know that they know this is a demonstration of girl power. And, frankly, whether itâs the lady Avengers assembling in âInfinity War,â a montage of âthese girls do sports AND scienceâ in the latest âCharlieâs Angels,â or all of âOceanâs 8,â itâs hard not to see it as insulting to its purported audience.

There have been subtler, cleverer and just plain better efforts at bringing women to the forefront of so-called male genres (check out Steve McQueenâs âWidowsâ ), but âThe 355â has cool action moments and talented actresses.  Itâs worth a look if you like the spy film genre or are a fan of the actresses involved. ♦