Cast is phenomenal, story is engaging, and Steve McQueen shows he can make a big studio picture in a way that few other directors even attempt. 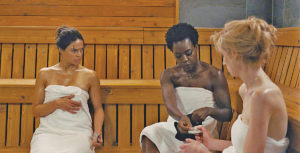 Thereâs really no telling how one might react after losing a loved one. The five stages of grief include denial, anger, bargaining, depression and acceptance. Some might lash out and blame the world for their woes. Others might turn inward and shut out those around them. And still others might try to find an answer to what happened, a higher meaning for their loss and perhaps why they were chosen to experience this pain.

For teacherâs union rep Veronica (Viola Davis), dealing with grief isnât her concern â itâs footing the bill her late husband left her. As you might presume from the movieâs title, Veronica, together with fellow widows Linda (Michelle Rodriquez), Alice (Elizabeth Debicki) and Amanda (Carrie Coon), are left in a tight spot when their late husbandsâ robbery of a local gangâs stack of cash goes badly wrong. The leader of the heist, and Veronicaâs husband, is Harry Rawlings (Liam Neeson), and his certain set of skills are not enough to save him this time.

The victim of the robbery, Jamal Manning (Brian Tyree Henry), is a kingpin who is tired of the dangers of the street life and has decided to go into something equally as crooked (politics) but a lot safer. He is running for local office in the upcoming election against Jack Mulligan (Colin Farrell), who is trying to take over the role as part of a long dynasty that began with his grandfather, now from his grouchy father, Tom (Robert Duvall). Where Jamal might be better with words, Jamalâs brother Jatemme (Daniel Kaluuya) has a more physical approach to resolving issues.
When Veronica finds a notebook Harry left behind containing the details of their next job, she gathers the widows together to get the job done and save themselves from a bullet in the head.

Itâs worth noting here how impressive both the lead cast and supporting cast are in this film. Leading this disparate group of women is Oscar-winner Viola Davis. She brings a strength and vulnerability to her role and makes a surprisingly complex and charismatic center to this film. Joining her is the always tough and gritty Michelle Rodriguez and the eminently watchable Carrie Coon. The surprise performance of this group of widows is Elizabeth Debicki. Her widow, Alice, is more than just the âgood-lookingâ trophy wife and has a depth and gravitas that upon first glance is not something that seems to be there.

McQueen has assembled an interesting cast to support these women â each âsmallerâ role filled with someone who brings something to the table that makes their character interesting. Liam Neeson, Robert Duvall, Collin Farrell, stage-to-screen standout Cynthia Erivo, the always watchable Garrett Dillahunt and Jackie Weaver fill the film with screen presence, power and strong characterizations that service the story. Special notice should be made for Daniel Kaluuya. His menacing and methodical Jatemme ranks right up there on the list of guys you DO NOT want to cross. He was fascinating to watch, especially when he was doing nothing. You could see the animal swimming within him in the stillest of moments.

âWidowsâ is an engrossing, methodical, slow-burn story about what someone who has lost everything is capable of. The cast is phenomenal, the story is engaging, and McQueen shows he can make a big studio picture in a way that few other directors even attempt. ♦