A pure thrill to watch

âNo Sudden Move,â a crime thriller about the mobs that ran the Motor City, proves once again that the crooked path to a quick payday never goes smoothly. 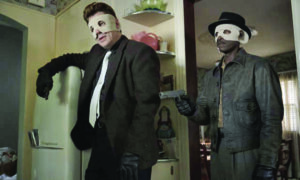 Set in the wild American Midwest of Detroit, Michigan, âNo Sudden Moveâ is, on the surface, a crime thriller about the mobs that ran the Motor City throughout much of the 20th century. The film is a rather standard mob flick, reminiscent of Shane Blackâs âThe Nice Guysâ and Scorseseâs âThe Irishman.â

The movie is delightful, and its cast is mind-bending: Don Cheadle, Benicio del Toro, David Harbour, Brendan Fraser, Jon Hamm, Amy Seimetz, Julia Fox, Ray Liotta, Kieran Culkin, Noah Jupe, Frankie Shaw, Bill Duke and Craig âmuMs the Schemerâ Grant (plus, a few surprises as well). But more fun than watching the cast act is the feeling of being in good hands â of watching a confidently directed movie that has something to say but doesnât sacrifice style for substance. Soderbergh shot on modern cameras but used period wide-angle lenses, creating a strange fish-eye effect at times and making the audience feel like a fly on the wall while everything is going down. Itâs a pure thrill to watch.

Soderbergh manages to subvert expectations by making the film, largely, a commentary on capitalism, greed and corruption within the American elite, in this specific case, the automobile industry that made Detroit famous. We start out following some everyman characters who haphazardly climb the social echelons until they are rubbing elbows with the mightiest figures in all of Detroit.

Kurt Goynes (Don Cheadle) is a member of the African mob in Detroit and was just released from jail after a job gone bad. He is hired for a new job by Mr. Jones (Brendan Fraser), a man whose allegiances are unknown, and the job sounds a bit too sweet to be true. They pick up one more guy, Ronald Russo (Benicio del Toro), before meeting up with a third, Charley (Kieran Culkin), and discuss the parameters of the job. They are tasked with babysitting a family while Charley takes the familyâs patriarch (David Harbour) to steal a file from the safe of his boss. The job goes awry when Kurt senses a set-up, submerging himself in a massive plot to steal something far more valuable than they could ever imagine.

After all, the crooked path to a quick payday never goes smoothly â at least in the movies.

The political commentary within âNo Sudden Moveâ is handled rather well and is not broached, for the most part, until the second half of the film. The beginning half is a purposefully confusing set-up that sets the overall tone and theme of the film: Trust gets you killed, and everyone around you has an ulterior motive.

The two form an uneasy alliance and begin scheming with â and against â each other to secure the asset and sell it. The pair moves from dingy bars and houses to middle-class homes, to upper-middle-class homes, then to the upper class, then to the 1% as they slowly sniff their way to the money. They accept the initial job for $5,000, which turns into $25,000, then becomes $45,000, then $90,000, up to $125,000 then, finally $375,000, all the while dealing with every mobster theyâve ever worked with trying to double-cross them and take what they want at their expense.

Itâs a movie about everyone getting double-crossed, how you canât trust anyone, and how nobody is looking out for anyone elseâs best interest unless itâs also their own. Without revealing too much, this dog-eat-dog take letâs you know the outcome isnât going to be pleasant, but it will be something you likely believe in the back of your mind.

âNo Sudden Moveâ was hampered quite significantly by the pandemic, having its release pushed back several times and ultimately being dropped onto HBO Max with little to no fanfare. This is a shame because this is a genuinely good film, better than a lot of other things hitting the screen recently. The brilliance of âNo Sudden Move,â apart from the terrific direction, performances and the movie-watching experience it serves up, is in how it layers American history into a twisty crime tale that keeps the audience guessing. You wouldnât have to know any of this history to follow whatâs going on. But the attention to detail only increases my admiration for the film and how subtly it weaves its social message into its snaky, bendy plot. The movie kept me guessing, included some surprise cameos, and left me dreading what would happen next â in the best way possible. ♦