This sequel might put the franchise to rest for another 27 years. 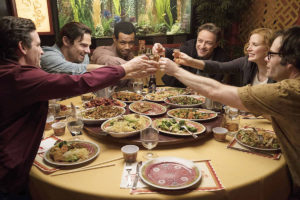 If you came across nightmares from your childhood today, how would you respond? Thatâs one of the questions at the center of âIT: Chapter 2â that audiences can explore long after theyâve left their seats. And itâs this question that simultaneously make is this film as fun as it is infuriating.

This sequel to the highest-grossing horror movie of all time takes place 27 years later in the same town of Derry, Maine. The Losers Club are adults now and have gone their separate ways. Their time spent away has clouded their memories to the point where it seems that what brought them together that summer nearly three decades ago feels like a strange dream. Unfortunately, the good fortune for each is put to an end by the return of Pennywise (Bill SkarsgÃ¥rd), who seeks more victims for his twisted games. Being the only ones who have stopped the evil force, the adults must come together again to put an end to this bloody mess.

What made the first film so successful was how it took the time for character development. As the audience, we felt we understood the Losers because they were representative of kids we once knew in our youth. We understand how a major event can bring people together in truly powerful ways. Growing up is a strange and oftentimes confusing time for kids, but knowing that someone else has your back can give you strength to do things you never imagined possible without that support. Those are the ideas that the first installment takes time to hammer down so that, by the time the Losers face Pennywise, you actually believe they could stand a chance against this immortal evil.

The main issue with this movie is in its inconsistencies, which is what also makes the director a genius. As the film progresses, it is difficult to tell if a scene was attempting to set a somber, foreboding, menacing feel, or if it was trying to create an atmosphere conducive toward a lighthearted, hilarious, jump-scare-filled marathon. In one moment, it hangs heavy in emotional gravitas (e.g., the opening scene is especially brutal and difficult to watch, and Stanleyâs suicide is also dark), and the next, itâs so ludicrously over the top and in your face in its execution of its âhorrorâ elements (e.g., the fortune cookie scene in the restaurant) that it produces a jarring sense of discord. What exactly is this film attempting to be? The horror was so absurdly comedic in its execution (not helped by questionable effects work) that I assume that was the intent.

And itâs that (possible) intent that might be the brilliance of the movie. Think about something you were truly horrified by as a kid. Maybe it was clowns. Maybe it was a mangled tree in your neighborhood. Or maybe it was just the dark. Now look at that fear through the lens of adulthood. It feels a little silly to have been so afraid of those things.

Thatâs how the Losers are seeing things today. Theyâve basically had their memories erased â aside from Mike (Isaiah Mustafa), because he stayed in Derry â so theyâre facing their childhood fears through adult eyes.

The rest of the Losers have their moments, but in total itâs hard to really care â a tragic twist from how audiences felt about their childhood counterparts. Aside from this, the most noticeable negative about this film is its run time â nearly three hours.

Perhaps this movie simply suffers from not being able to stand on its own. Play it back to back with âIT: Chapter 1,â and you might find storylines that connect better with an investment in the characters that remains strong throughout. I struggled to pay attention. Aside from the idea of seeing childhood fears through adult eyes, there was little to grasp on to. More action than horror, âIT: Chapter 2â might put the franchise to rest for another 27 years. ♦