‘Booksmarts’ is familiar yet wholly new

Turns out, itâs not that hard to get into college. 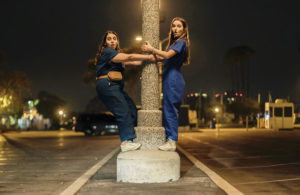 âBooksmartsâ follows the high school BFFs Amy (Kaitlyn Dever) and Molly (Beanie Feldstein), whoâve stayed out of trouble for their entire academic career so that they could get into the best colleges. But when Amy and Molly discover that all their hard-partying peers got into the same big-name institutions as them, the girls resolve to have as much fun as they can before their glory days are over. Turns out, itâs not that hard to get into college. (An interesting idea to push considering the hot topic of well-to-do parents finding a âside doorâ into universities.) What better reason to cut loose than realizing the whole system is broken?

The movie is, at times, a by-the-numbers, best-friend comedy where the ultimate goal is to get to the party, while learning about themselves and each other along the way. And while some scenes might leave you with a feeling of âbeen there, done that,â others will have you in stitches on the floor.

Take for, instance, an early introduction to Molly, a smart â and definitely smug â overachiever. While other kids spend their last day of classes filling up water balloons, she tries to tie up administrative loose ends. During a break in the bathroom, she canât help but correct a graffiti typo on the wall. At the same time, three other students are in there dissecting and critiquing her personality. Coolly and calmly, she exits the stall and delivers an eviscerating comeback that is both cold yet seemingly spot-on.

In any other movie, this would have been a moment of triumph. Instead, the bookworm standing up to bullies is made to feel even smaller as her aggressors detail post-graduation plans just as, if not more, impressive than hers. Itâs a nasty shock to the system, a reveal that puts her entire perspective on school on its head, a realization that, in fact, it was possible to both work hard and play hard â her teenage years now seeming like a wasteland of early nights and rejected party invites. Molly decides its time to embrace the recklessness sheâs spent her whole life striving to avoid.

More fearful and passive, Amy isnât so sure. Where Molly knows exactly what she wants, Amy is more cautious, more soft-spoken. Sheâs more the sensitive activist looking to make a difference in the world, not by being the best like Molly, but by doing what no one else will (or seems to want to) do.

Although sheâs been an out lesbian since her sophomore year, sheâs too much of a perfectionist to fail at sex and is nursing a crush on a hot skateboarder. Molly insists that the party will be the perfect opportunity for her to make her move before she leaves to volunteer in Botswana. All they have to do now is track down the partyâs address.

The other dozen or so classmates bring their own unique energy to the screen, brightest among them being Gigi (Billie Lourd), a manic party girl who leaps into the frame unexpectedly with a mane of wild hair and a face of glitter, Molly and Amyâs witchy compass and possible guardian angel. Gigiâs best friend Jared excels as a boy as desperate to be cool as Molly is desperate to be important.

Itâs hard not to make comparisons with other films in this genre, but thatâs part of what makes this so fun. It is familiar yet wholly new and brings to light different tropes weâll likely see more often as women take the helm in directing the next generation of comedies.

The best point Wilde seems to be trying to make is that â like high school â there are no villains in âBooksmart,â only people who you donât understand yet. We are made to judge each character from Amy and Mollyâs point of view â one that we learn is woefully misinformed. ♦