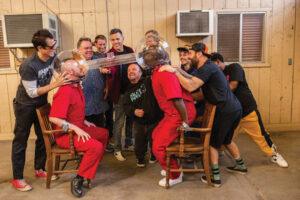 Audiences can expect to see the cast up to their regular, wild antics. With 11 years between the third and fourth films, fans of the original series are wondering if they will see the same craziness in the stunts with a cast who are now 10-plus years older. That query can be answered with the following filming incidents: During the two days of test filming, professional skateboarder Aaron âJawsâ Homoki broke his wrist. Following this incident, the team received a green-light to start filming. Within two days, both Johnny Knoxville and Steve-O were hospitalized for on-set injuries. While the context for these injuries was not disclosed, we will definitely see what caused them upon the filmâs release. Additionally, in an interview with his podcast The Nine Club, Wee-Man stated that âJackass Foreverâ âhurt the most,â so it is not likely the team has lowered its standards of reckless hilarity. In the trailer, we see Johnny Knoxville going face to face with a bull for the fourth time in the Jackass film series. This is one of the many ways that this installment will pay homage to earlier skits. 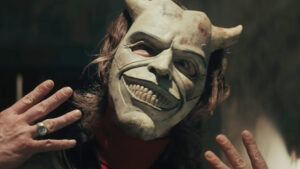 âThe Black Phoneâ is a bold return to form for Scott Derrickson and C. Robert Cargill. After their turn on âDoctor Strange,â the duo has returned to their roots in intimate and terrifying horror.â Adapted from Joe Hillâs short story of the same name, âThe Black Phoneâ is a violent horror film that captures the audienceâs emotions as quickly as the filmâs antagonist kidnaps children in broad daylight. Ethan Hawke stars as a masked kidnapper (nicknamed âThe Grabberâ) who terrorizes a suburban Colorado town in the 1970s. Hiding behind the facade of a clumsy magician, he lures kids in with kindness before eclipsing their world with malice and a swarm of signature black balloons. The story is told through Finneyâs perspective as audiences get a glimpse into his home and personal life before he becomes the kidnapperâs latest victim. In between dodging his classmates on the prowl to beat him up, Finney has to walk on eggshells at home in order to avoid any further abuse from his alcoholic father. The only solace he can find is alongside his sister Gwen (Madeleine McGraw), a sweet yet religious spitfire in pigtails, who has no qualms about cussing out cops or smashing a rock over a bullyâs head. 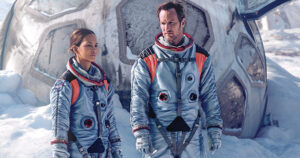 A mysterious force knocks the moon from its orbit around Earth and sends it hurtling on a collision course with life as we know it. With mere weeks before impact and the world on the brink of annihilation, NASA executive and former astronaut Jo Fowler (Halle Berry) is convinced she has the key to saving us all, but only one astronaut from her past, Brian Harper (Patrick Wilson) and conspiracy theorist K.C. Houseman (John Bradley) believe her. These unlikely heroes will mount an impossible last-ditch mission into space, leaving behind everyone they love, only to find out that our moon is not what we think it is. ♦