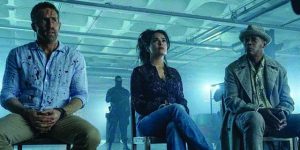 The Hitmanâs Wifeâs Bodyguardâ
R | 116 minutes
Director: Patrick Hughes
Stars: Ryan Reynolds, Salma Hayek, Samuel L. Jackson
The worldâs most lethal odd couple â bodyguard Michael Bryce (Ryan Reynolds) and hitman Darius Kincaid (Samuel L. Jackson) â are back on another life-threatening mission. Still unlicensed and under scrutiny, Bryce is forced into action by Dariusâ even more volatile wife, the infamous international con artist Sonia Kincaid (Salma Hayek). As Bryce is driven over the edge by his two most dangerous protectees, the trio get in over their heads in a global plot and soon realize they are all that stand between Europe and a vengeful and powerful madman.

âCruellaâ
PG-13 | 134 minutes
Director: Craig Gillespie
Stars: Emma Stone, Emma Thompson, Joel Fry
Before she becomes Cruella de Vil. teenaged Estella (Emma Stone) has a dream. She wishes to become a fashion designer, having been gifted with talent, innovation and ambition all in equal measures. But life seems intent on making sure her dreams never come true. Having wound up penniless and orphaned in London at age 12, Estella runs wild through the city streets four years later with her best friends and partners-in-(petty)-crime, Horace (Paul Walter Hauser) and Jasper (Joel Fry), two amateur thieves. When a chance encounter vaults Estella into the world of the young, rich and famous, she begins to question the existence sheâs built for herself in London and wonders whether she might, indeed, be destined for more after all. When an up-and-coming rock star commissions Estella to design him a signature piece, she begins to feel as though she has truly arrived. But what is the cost of keeping up with the fast crowd â and is it a price Estella is willing to pay? 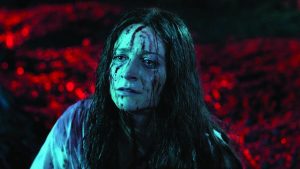 âCensorâ
R | 84 minutes
Writer/Director: Prano Bailey-Bond
Stars: Niamh Algar, Michael Smiley, Nicholas Burns
Film censor Enid (Niamh Algar) takes pride in her meticulous work, guarding unsuspecting audiences from the deleterious effects of watching the gore-filled decapitations and eye gougings she pores over. Her sense of duty to protect is amplified by guilt over her inability to recall details of the long-ago disappearance of her sister, recently declared dead in absentia. When Enid is assigned to review a disturbing film from the archive that echoes her hazy childhood memories, she begins to unravel how this eerie work might be tied to her past. ♦