If the Iowa State Fair isnât your thing, then check out all these other great things to do in August 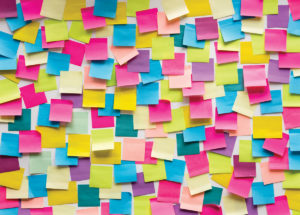 The State Fair is Iowaâs biggest event. In a state with roughly 3 million people, the Fair reports more than 1 million attendees. Fair fanatics are too loyal to ever stray, and CITYVIEW wouldnât insinuate anyone should miss it. But for Iowaâs non-Fair lovers, central Iowaâs 2018 calendar is loaded with all kinds of enticing options. While 1 million Fair-lovers congregate in one area, how much fun can you have rollicking through the rest of town free from the shackles of long lines and sold-out shows?

Iowaâs burning infatuation for the Iowa State Fair is undeniable, but here are some ideas for those who want
something else to do during August. 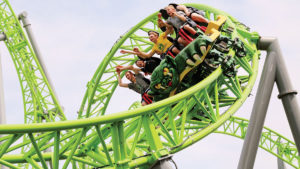 Admittance to the water park is included in the price of admission to Adventureland. The water attractions include swimming pools, wave pools, a lazy river, waterslides and âall of that good stuff to beat the heat.â Photo submitted

Splash parks, public pools and aquatic centers now exist in Des Moines proper and nearly every surrounding area. The populations at these pools figure to be fewer in August, partially due to Fair attendance and also as a result of an early summer heat wave creating sun fatigue. Visiting any of these pools is an option, or, if you want to up the ante on 21st century fun in the sun, can you say Altoona?

âAny time is a good time to come to Adventureland,â says Molly Vincent, a spokesperson for the amusement park. âBut Fair season is usually hot and dry, and that is also a great time because we have a huge water park.â

Vincent says the price of admittance to the water park is included in the price of admission to Adventureland. The water attractions include swimming pools, wave pools, a lazy river, waterslides and âall of that good stuff to beat the heat.â

âThere are also roller coasters and tons of little rides for little kids or anywhere in between,â she says.

Is Vincent going to the Fair?

âI work during the Fair,â she says. âWeâre open from early in the morning until late at night, so I very rarely get to go to the Fair.â 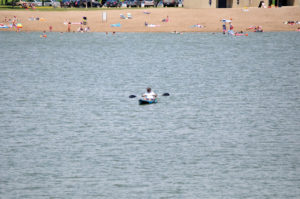 Grayâs Lake has become a paddle boarding, canoeing, kayaking and boating hotspot, along with its ever popular 2-mile walking trail. Photo submitted

Non-chlorinated swimming options are also popular in the Des Moines area. Grayâs Lake should have more open space during the Fair season. The south-side destination has become a paddle boarding, canoeing, kayaking and boating hotspot, along with its popular 2-mile walking trail.

Saylorville is somewhat harder to get to than Grayâs Lake, but the massive man-made lake is central Iowaâs clear king for boating and camping. Fair or no Fair, the campgrounds fill up fast in the summer, according to Emma Nelson, a natural resource specialist at Saylorville. So donât expect the crowds to ease up any in August.

âIt is a challenge to get out here and get a campsite no matter what time of the year,â she says. âIâd say it is more of a challenge during the Fair.â

Thatâs due to incoming out-of-towners attending the Fair who often seek to set up camp at Saylorville. Nelson adds that even though camping availability is limited, the facilityâs picnic areas, beaches, fishing and boating options are generally accessible for all comers. Wildlife watching, primarily birds, is also a popular option for anyone, as is the Saylorville Lake Butterfly Garden, watching sunsets and walking through Red Feather Prairie.

âYes,â she says. âOur booth is in the Halls of Law and Flame, under the Grandstands.â

For the pasty-skinned people, for whom no SPF exists strong enough to shield their sorry-excuse-for-an epidermis, options abound for enjoying a movie. Flix is an especially viable summer entertainment option no matter how your skin holds up in the scorching heat. Equipped with ice-cold air conditioning, attendees watch carefully crafted films, as opposed to watching some of the stateâs not-so-carefully crafted people at the Fair. And the food at Flix is served on a tray, not a stick.

âGenerally we are a little bit slower during that time, so it is not as crowded,â says Flix General Manager Emily Verke. âAnd it is a little easier to get a ticket.â

Is Verke going to the Fair?

âI am going to the Fair,â she laughs. âBut Iâll also be at Flix Brewhouse.â

August is not traditionally a big month for blockbuster movies, but it could hold its own in 2018. Three movies are playing at Flix:

Aug. 10: âThe Megâ is a summer shark movie. After escaping an attack by what he claims was by a 70-foot shark, the protagonist must confront his fears to save those trapped in a sunken submersible.

Aug. 15: âCrazy Rich Asiansâ is a date night movie based on a best-selling novel where three wealthy Chinese families prepare for the wedding of the year.

Aug. 17: âThe Happytime Murdersâ is an adult R-rated comedy. When the puppet cast of an â80s childrenâs TV show begins to get murdered one by one, a disgraced LAPD detective-turned-private eye puppet takes on the case. 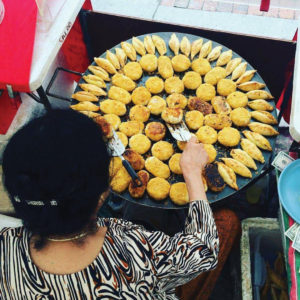 The Downtown Farmersâ Market might be easier to manage during the Iowa State Fair, according to Saloo Sadiq. The crafter of Indian cuisine is in her 30th and final year at the weekly downtown event. Photo submitted

Generally packed with wall-to-wall people, the Downtown Farmersâ Market might see some relief during the Fair, according to Saloo Sadiq, a veteran food vendor at the market.

âThe crowds become less from that time on,â she says. But she also adds that the marketâs popularity doesnât fall far due to the influx of out-of-town Fair attendees who make up some of the difference. She says these people opt to spend Saturday morning at the market before heading east.

The sizzling morsels of scrumptiousness in Sadiqâs skillet are part of the reason for that. Her food keeps customers coming back, but this summer is your last chance to taste Sadiqâs authentic, handmade, homemade Indian cuisine. The long-time food vendor is in her 30th and final year at the weekly downtown event.

But does Sadiq attend the Iowa State Fair? 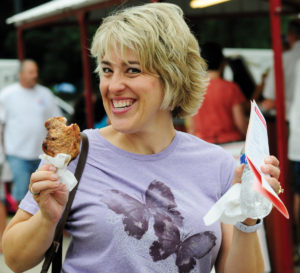 The famous Iowa State Fair Butter Cow begins as a wood, metal, wire and steel mesh frame. A sculptor then adds layers that eventually add up to 600 pounds of Iowa pure cream butter. The resulting life-sized specimen measures more than 5-foot high and 8-foot long, and it could butter more than 19,000 slices of toast. An average person would need to live two lifetimes to consume that much dairy, which may or may not seem like a worthy goal.

More Iowa babies were born in August last year than any other month. Maybe that is why so many Iowans enjoy the Fair. Born in August or otherwise, some people are born to be contrarians. To these fine folks, up is down, left is right, right is wrong, and when you say goodbye, they say hello. If you are one of the ones who is attracted to the opposite of what almost everyone else enjoys, then the following list is specifically for you. CITYVIEW hit the streets and asked random everyday Joes to identify fun things to do that are the opposite of the Iowa State Fair. CITYVIEW started with the butter cow.

What is the opposite of a butter cow?

âItâs small and has two legs. Plus, cows donât have feathers.â

âGhee is the opposite of a butter cow,â says some random woman waiting in line at a store.

What is the opposite of Fair food?

According to someone who has never been, the answer is Baru 66, a contemporary French bistro in Windsor Heights. Master Chef David Baruthioâs offerings include a lavish ambiance and some of the cityâs finest cuisine.

The opposite of food on a stick?

âFunnel cakes,â says an unknown voice. A sense of longing is detectable in this personâs soul.

âFry an egg on the pavement,â inserts the first person. âIf this is possible.â

The opposite of a sunburn?

âA milk spa bath,â offers one friendly woman. âOr a mud mask at a spa treatment, or a mud facial.â

The opposite of sweating?

The opposite of going with the flow or getting lost in the middle of a multitude?

âCapitalizing upon the crowds by cashing in as an UBER driver,â offers a friend. âRoll out the Serta and channel your inner Kristian Day by renting rooms in your home to couch surfers.â

What is the opposite of milking a cow?

âDrinking skim milk straight from the container and putting it back in the refrigerator,â says a co-worker, who is also someone who prefers to remain anonymous.

What is the opposite of fried food on a stick?

âGrowing (instead of eating) vegetables in your backyard garden,â says a green-thumbed person.

What is the opposite of a barnyard smell?

âThe detergent aisle at Target,â says a man who should be wearing a suit. âPerfume. The rose garden at the Art Center.â

What is the opposite of a Ferris wheel?

âThe Maquoketa Caves State Park,â adds a lady with a keen sense of style, referring to the Iowa DNRâs quiet underground attraction without much light.

What is the opposite of people watching?

âBird watching,â someone says before correcting himself. âCaller ID, because you can ignore whoever you want. Or maybe hide-and-go-seek, for obvious reasons.â

The opposite of a beer tent?

âA martini,â says a daydreaming man before remembering his lifeâs goals and doing a 180. âOr maybe a fresh wheatgrass smoothie.â

The opposite of camping?

What is the opposite of parking on a lawn?

The opposite of the Midway?