Opening in May: The nation’s biggest skatepark 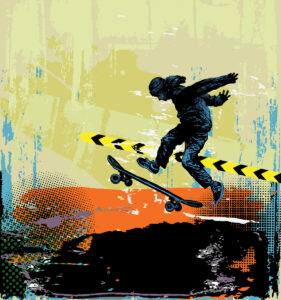 The biggest skatepark in the nation? In Des Moines?

Roughly 15 years in the making, the Lauridsen Skatepark is set to open at the end of May in the heart of downtown Des Moines. Located on
five acres at the northern edge of the Principal Riverwalk, and just east of Wells Fargo Arena and the Iowa Events Center, the massive park â totaling 88,000-square-feet of skateable terrain â already has the attention of the Dew Tour and other pro skateboarding circuits. Thatâs sweet.

The $7 million, Olympic-caliber skatepark, designed by California Skateparks, will be able to host amateur through world-class professional
events, and since skateboarding is now an official Olympic sport, effective this summer at the Tokyo Olympics, the Lauridsen Skatepark could possibly even host future Olympic trials.

One of the parkâs physical highlights includes the nearly quarter-mile Skate Promenade. This one-of-a-kind feature uses the previously existing Riverfront Road footprint to provide a 38-footwide space populated with street skating features, including flat-rails, curbs and quarter pipes. Thereâs also the amoeba pool and junior flow bowl, providing areas for skaters of all skill levels to master tricks in style. And to really impress skaters and spectators, there is a large sculpture that spells âWOWâ that is designed to be skated on.

Amping up the local skate scene 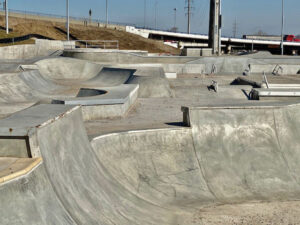 Time will tell if the new park draws âlocal, regional, national and Olympic qualifying events,â as
organizers have suggested it could, but regardless, the 88,000 square feet of freshly poured concrete has the attention of local skateboarders like Mirza Jasarovic.

In the past, Jasarovic, whoâs been skating for 11 years, had to travel to skateparks in Knoxville or Oskalooska if he needed a certain obstacle to train on. What excites him most about the Lauridsen Skatepark is that now he wonât have to go far to find the elements heâs looking for.

âIt provides the opportunity for skaters to learn every type of skating that they want to and allows for a lot more progression than was available before,â Jasarovic says of the skatepark. 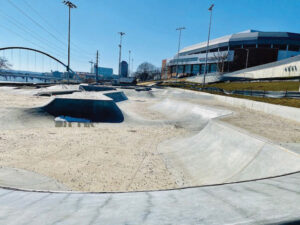 And thatâs really why he skates in the first place â the ability to progress. Jasarovic wants to feel he is better at his craft than he was the day before, and skating allows for the feeling of improving every day.

Lately, he and his friends tend to find themselves at the recently built skatepark in Valley Junctionâs American Legion Park. At 5,000 square feet, the park is âkind of just holding us over until the new one is done.â

When the downtown park officially opens next month, âIâll probably be there almost every day,â Jasarovic says, adding that he thinks the park will bring in lots of new skaters.

âIâve already seen so many new skaters popping up just because the skatepark is about to open,â he says.

âThen, after itâs open, Iâm sure there will be tons and tons more. So, in a way, I feel like the skate scene will explode after the skatepark is built.â

âI think itâll bring a lot more skaters downtown and to central Iowa,â he says. Like Jasarovic, he often skates at American Legion Park or Walker Johnston Park in Urbandale. Morgan also hits up the streets of downtown or a parking garage if it rains or snows, so having the new park will offer him access to all the skating elements he enjoys in one spot.

A skater for about 14 years, Morgan loves it because itâs challenging.

âI was never really interested in sports as a child that revolved around other people,â he says. âIâd rather go at my own pace and work on myself as an athlete rather than focus on other people. With skateboarding, itâs just you and a piece of wood, and it all revolves around what you can do with it.â

With the Lauridsen Skatepark, Morgan believes skaters in Des Moines will get more attention.

Ultimately, the Lauridsen Skatepark gets Morgan pumped because itâll challenge him to grow at his craft, and heâll get to practice what heâs passionate about at a best-in-class park right in Des Moines.

âIâm just excited to go skate this summer,â he says. 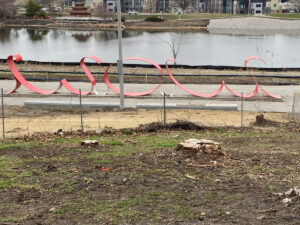 One of the features of the park is the WOW sculpture that is designed to be skated on.

So how exactly did this remarkable skatepark come to be?

In the early aughts, members of A Mid-Iowa Organizing Strategy (AMOS) had a retreat in which they debated critical and unmet needs in the community. One conversation, led by a youth group, focused on the need for skateboarding facilities in the area. A public skatepark quickly became a project to pursue, so AMOS put together a committee and sought support from the City of Des Moines, which donated two acres of riverfront property for the skatepark.

Doug Romig, who at the time served as a recreation manager with the City of Des Moines Parks and Recreation Department, was one of the folks in attendance at the retreat. Though the project took time to find its footing, perseverance from community members enabled the flame to stay lit.

âOver my career, I would hear bits and pieces of this project, but it was the local youth and their parents who kept this vision alive,â Romig says.

Romig now works as the deputy director for Polk County Conservation, which was recently approached by the Polk County Board of
Supervisors to manage the skatepark moving forward. That agreement was approved by both parties last year.

âWhile not a traditional element of a conservation organization, it does meet our mission to promote outdoor recreation, and we are excited about this opportunity,â Romig says.

Since being given oversight, Polk County Conservation has issued bids for operational services at Lauridsen Skatepark, such as lawn care and custodial services. They also entered into an agreement to provide on-site WiFi and live streaming cameras throughout the park, which, in addition to being for security purposes, will allow anyone to watch whatâs happening at the skatepark. 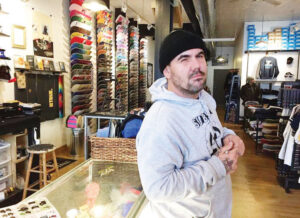 Kevin Jones, owner of Subsect Skateshop, has been a champion of the Lauridsen Skatepark
from day one. Photo submitted

Romig explains that the benefits of having a world-class skatepark in Des Moines are numerous.

âFirst and foremost, it provides a unique place for metro youth to develop and advance their sport,â he says. âIt aids in attracting and retaining young business talent, and it provides an economic boost to the local economy from families vacationing to Des Moines to skate at the park, as well as our ability to host regional, national and international events, as two of the elements meet Olympic requirements.â

Polk County Conservation has also teamed up with Skate DSM, a local nonprofit founded in 2019, to develop and implement programming for skateparks across central Iowa and to provide on-site camps, clinics and exhibitions to aid in growing the sport of skateboarding.

The communityâs backing of the Lauridsen Skatepark is evidenced by the combination of grants, private donations and public funding sources that made its existence possible. 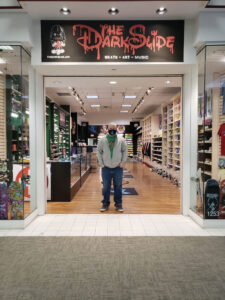 Owner of The Dark Slide, Joel Jackson is excited to see the local
skate scene grow because of the park. Photo submitted

A $50,000 grant from the Community Foundation of Greater Des Moines helped secure the skatepark design by California Skateparks â which dubs itself the âworldâs most recognized skatepark design and build firmâ â and in 2015, a $500,000 challenge grant from the foundation was provided to encourage others to support the project, and people rose to that challenge. 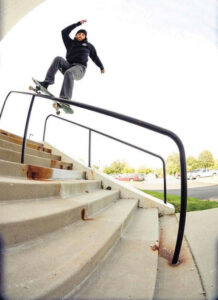 In the past, Mirza Jasarovic has skated on whatever terrain was available. He looks forward to all the different elements the Lauridsen Skatepark will provide. Photo by Derrick Lambertz

Since then, numerous other individuals, corporations, foundations and nonprofit organizations have donated to the project.

Yet perhaps no one has championed the creation of the Lauridsen Skatepark more than Kevin Jones, owner of Subsect Skateshop in the East Village. Jones has been advocating for the Des Moines skate community for years, and while it was a long road to bring this new
skatepark to fruition, he didnât give up.

âI guess you could say I never would shut up about it,â he jokes. âI just kept pounding and saying the importance of it and would just never let it go.â

His resolve to get the Lauridsen Skatepark built certainly paid off. With its opening right around the corner, Jones, whoâs been skating for 34 years, is thrilled that, after all these years of being involved, heâll still be able to skate the park himself. He also believes the skatepark will help grow the local skate scene, especially since, in the last two years, heâs already seen a spark with more kids getting interested, including more females. Jones says even older skaters are dusting off their skateboards and hopping back on. He thinks that the Lauridsen Skatepark is serving to get people fired up, and since the park will bring events and crowds of people to town, itâll help boost the local economy as well.

âIâm excited for what it can do for the city, especially after the year weâve had,â Jones says. âThe city could use a win, and I think this park will bring some wins.â

Though conversations about building this massive downtown skatepark began in 2004, a groundbreaking event wasnât held until 2018. Itâs been several years in the making, but now that the official opening is just weeks away, the local skate scene is one of anticipation. SportsTravel magazine even named the Lauridsen Skatepark one of its new sports venues to watch in 2021.

This dream of many is about to become a reality.

Joel Jackson, owner of The Dark Slide, a skateboard shop in Merle Hay Mall, moved to the area last fall, but heâs already dialed into the local skate community and can see what an advantage the skatepark will be. 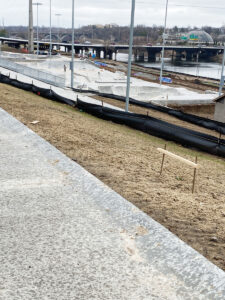 From stairs to dips to sidewalks, the park has a variety of skate obstacles. Photo by Lindsey Giardino

âItâs just exciting that the countryâs largest skatepark is coming to Iowa,â he says. âEspecially right after moving here, itâs so amazing to find out how weâre going to be the new hotspot for skateboarding. You donât picture Iowa and skateboarding hand in hand like that, but this will be the new Midwest mecca. Thatâs very exciting.â

Jackson helps lead a local skate club for beginner and intermediate skaters, and although they need to learn the basics before jumping into a skatepark as big as the Lauridsen, his mission is to get the kids skilled enough so they can soon maneuver the park.

âTheyâre anticipating 60,000 to 70,000 outside skaters a year visiting,â Jackson says. âThatâs huge just because thatâs potentially drawing in some pretty advanced skaters. When you skate with folks beyond your ability, that tends to push you and make you better.â

Getting more kids involved in and enthusiastic about skateboarding â an activity that has many benefits, from providing a cardio workout to encouraging social skills â is another bonus to having the skate park available.

Take it from 12-year-old Cash, whoâs beyond thrilled to skate at the park and hopes to see skateboard legend Mike Vallely there â not a stretch of the imagination since Vallely just moved himself and his skateboard company, Street Plant, to Des Moines.

Young Cash sums up best why the Lauridsen Skatepark will be so great.

âIâm really excited because I get to be outside and have fun,â he says. ♦